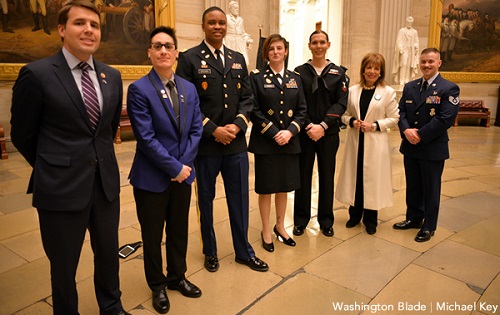 The U.S. House delivered on Tuesday evening a stinging rebuke to President Trump’s transgender military ban, adopting an amendment that would bar the use of U.S. funds to pay for the policy.

The vote on the amendment, introduced by Reps. Anthony Brown (D-Md.) and Jackie Speier (D-Calif.), was 243-183 and largely along party lines. The measure was adopted as part of $983 billion minibus legislation for fiscal year 2020 seeking to fund the Defense Department, as well as labor, health and human services, education, state-foreign operations and energy and water development.

END_OF_DOCUMENT_TOKEN_TO_BE_REPLACED 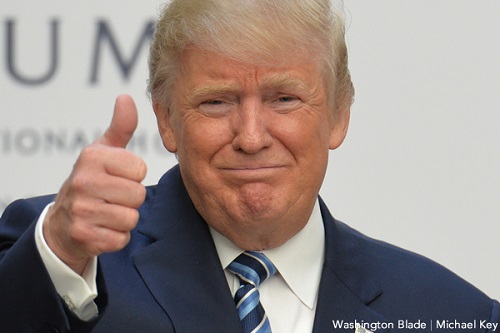 For the first time in three years in office, President Trump has recognized June as LGBT Pride Month in a series tweets Friday, referencing his administration’s international initiative to decriminalize homosexuality.

“As we celebrate LGBT Pride Month and recognize the outstanding contributions LGBT people have made to our great Nation, let us also stand in solidarity with the many LGBT people who live in dozens of countries worldwide that punish, imprison or even executive individuals on the basis of sexual orientation,” Trump wrote. “My administration has launched a global campaign to decriminalize homosexuality and invite all nations to join us in this effort!”

END_OF_DOCUMENT_TOKEN_TO_BE_REPLACED

Biden says Equality Act will be No. 1 priority as president

Judge: Trump’s ban on transgender troops on hold until trial

SEATTLE (AP) — A U.S. judge in Seattle has ordered President Donald Trump not to ban transgender troops from serving in the military, saying it’s unclear whether recent changes to his administration’s policy are constitutional.

END_OF_DOCUMENT_TOKEN_TO_BE_REPLACED 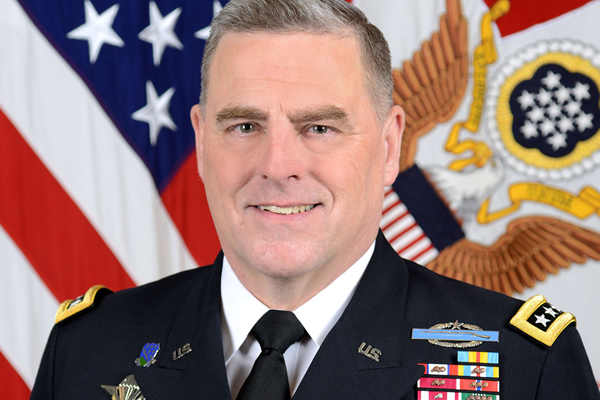 The top uniformed official in the U.S. Army on Thursday undermined recommendations from Defense Secretary James Mattis against transgender military service — which led to President Trump’s ban on transgender people in the armed forces — by asserting their presence has had no negative impact on unit cohesion

END_OF_DOCUMENT_TOKEN_TO_BE_REPLACED

Trans service members invited as guests to State of the Union 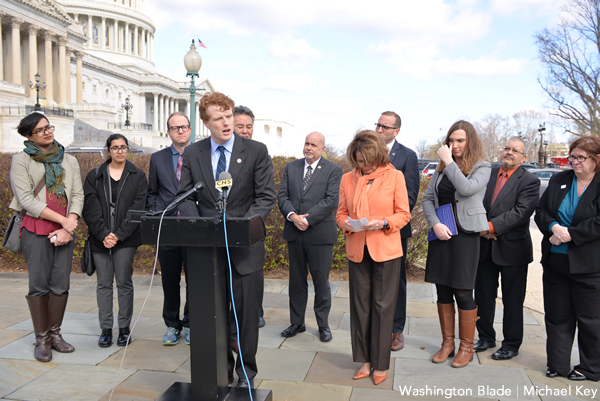 ABOVE: Rep. Joe Kennedy III (D-Mass.) has invited a transgender soldier to the State of the Union address. Washington Blade photo by Michael Key.

Two members of Congress have invited a pair of transgender troops to attend the State of the Union address Tuesday in the aftermath of President Trump’s attempt to ban them from the U.S. military.

END_OF_DOCUMENT_TOKEN_TO_BE_REPLACED

San Francisco- An independent commission led by a former U.S. surgeon general has concluded there “is no compelling medical reason” for the U.S. armed forces to prohibit transgender Americans from serving and that President Barack Obama could lift the decades-old ban without approval from Congress, according to a report released March 13.

The report said Department of Defense regulations designed to keep transgender people from joining or remaining in the military on the grounds of psychological and physical unfitness are based on outdated beliefs that require thousands of current service members either to leave the service or to forego the medical procedures and other changes that could align their bodies and gender identities.

“We determined not only that there is no compelling medical reason for the ban, but also that the ban itself is an expensive, damaging and unfair barrier to health care access for the approximately 15,450 transgender personnel who serve currently in the active, Guard and reserve components,” said the commission led by Dr. Joycelyn Elders, who served as surgeon general during Bill Clinton’s first term as president.

The panel, convened by a think tank at San Francisco State University, said the ban has existed for several decades and apparently was derived in part from the psychiatric establishment’s consensus, since revised, that gender identity issues amounted to a mental disorder.

The commission rejected the assumption that providing hormone treatment and sex reassignment surgeries would be too difficult, disruptive and expensive.

“I hope their takeaway will be we should evaluate every one of our people on the basis of their ability and what they can do, and if they have a condition we can treat we would treat it like we would treat anyone else,” Elders said.

Same sex marriages will be recognized in the nations capital