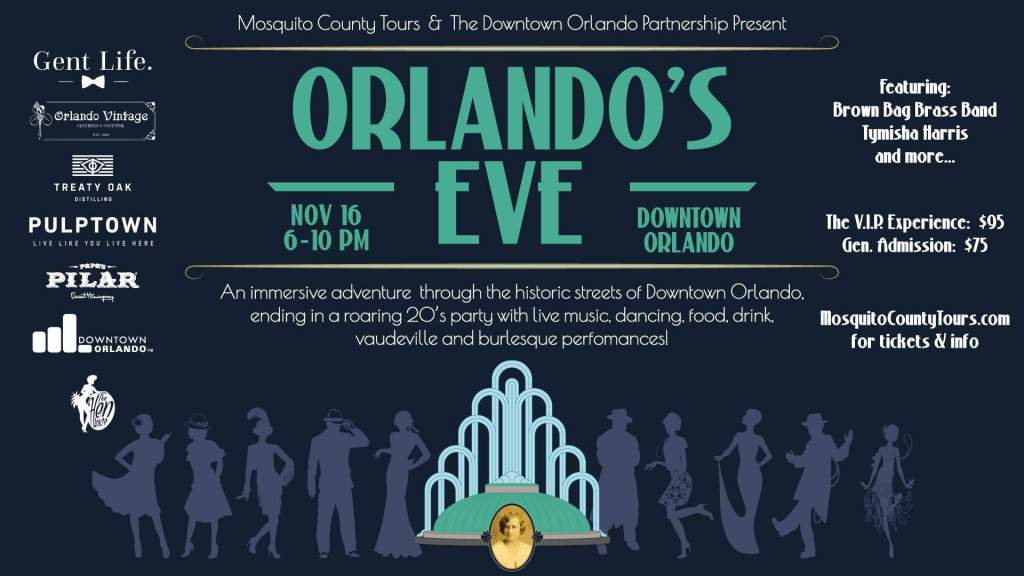 Orlando’s Eve is an immersive adventure through the historic streets of Downtown Orlando, highlighted by an interactive theater experience that culminates in a roaring 1920’s party at a secret speakeasy.

The evening features live music, dinner and drinks, as well as burlesque and vaudeville performances. Live music and dancing with Brown Bag Brass Band, and very special performance by Tymisha Harris (from award winning Josephine) will round out the evening. Orlando’s Eve interactive performances are being directed by Tim Williams of Orlando Shakes.

The evening begins at the Downtown Orange County Regional History Center where you will pick up clues and follow to historic locations around downtown. This is a great opportunity to explore a little of Orlando’s History before the adventure starts…

After the History Center, the immersive journey begins as you set off to arrive at different locations around Downtown, meeting historical figures from Orlando’s past along the way. Here you will interact with them, and collect clues that will eventually lead you to the ‘secret speakeasy party’. Gather up all of the clues, figure out the location and speakeasy password, and get inside for a fun-filled roaring 20’s party featuring a dinner buffet, delicious cocktails, live music and more.

The Other Side Of Life: Hashtag Amity

I was recently honored to be a guest of Pulse founder Barbara Poma for an intimate talk and tour of the interim #PulseMemorial organized by Equality Florida. As regular readers of this column know, I’m Watermark’s token conservative columnist: a red soul in a sea of blue, even as I have advocated for a just-right-of-center, nuanced approach to political discourse that I call Radical Centrism.

Arguing from a position of empathy and fact-driven rationality in favor of such positions as climate change resiliency, justifiable local taxation and the Florida Competitive Workforce Act, I have riled members of my own Party. In the age of Trump, I’ve become a bit of a #RINOsaur. While there are members of the current Republican power structure who are ready to revoke my membership card for some of my #RadicalCentrist positions, my attendance of an Equality Florida event would likely push them further toward apoplexy.

END_OF_DOCUMENT_TOKEN_TO_BE_REPLACED

The Other Side of Life: All That Freedom, And a Bag of Chips (eh?)

The Other Side of Life: ARC of the Covenant

Survival of the Kindest: After enduring the attack on Pulse, Brandon Wolf is living his life out loud and for his departed friends

It’s almost impossible to imagine the grief carried by Brandon Wolf, a Pulse survivor who lost his greatest friends. But there’s something about Wolf – some unexpected, well-versed resilience – that makes outside imagination seem ridiculous, anyway.

Wolf, who has become a voice against gun violence, and indeed a hero in his own right, lost friends Drew Leinonen and Drew’s boyfriend Juan Guerrero in June as he had run off to the bathroom. The details aren’t necessary, but Wolf is. Outside of Pulse six months later, he’s quick to turn ornaments around on a makeshift tree so that the faces of the 49 are shown.

END_OF_DOCUMENT_TOKEN_TO_BE_REPLACED

Do you know the ribbon man?: Ben Johansen steps up and steps out with the clear symbol of this year’s tragedy