STAR WARS Party: May The 4th Be With You

GOTH OUT WITH YOUR HOTH OUT at the 7th Annual Star Wars Night at The Castle!

COSTUME CONTEST Hosted by Supreme Leader BillY of Hell On Earth “gooodah…”
Come dressed as your favorite Star Wars Saga character or anything Sci-Fi related to win a Canto Bight casino’s worth of Cash/Prizes and celebrate the international phenomena of “May the 4th be with you.”

CHEWBACCA HOWL-OFF (Best Wookie Roar wins a delightful dinner Gift Certificate for those who are “always thinking with their stomach.”)

“Thank the Maker!” Presenting an Oil Bath that’s going to make you feel so good!

TREKKIES don’t be afraid to come out and show off your best gold, blues and reds. There will be a landing party assembled at the end of Tia’s bar upstairs. Try her Vulcan Death Grip shot. 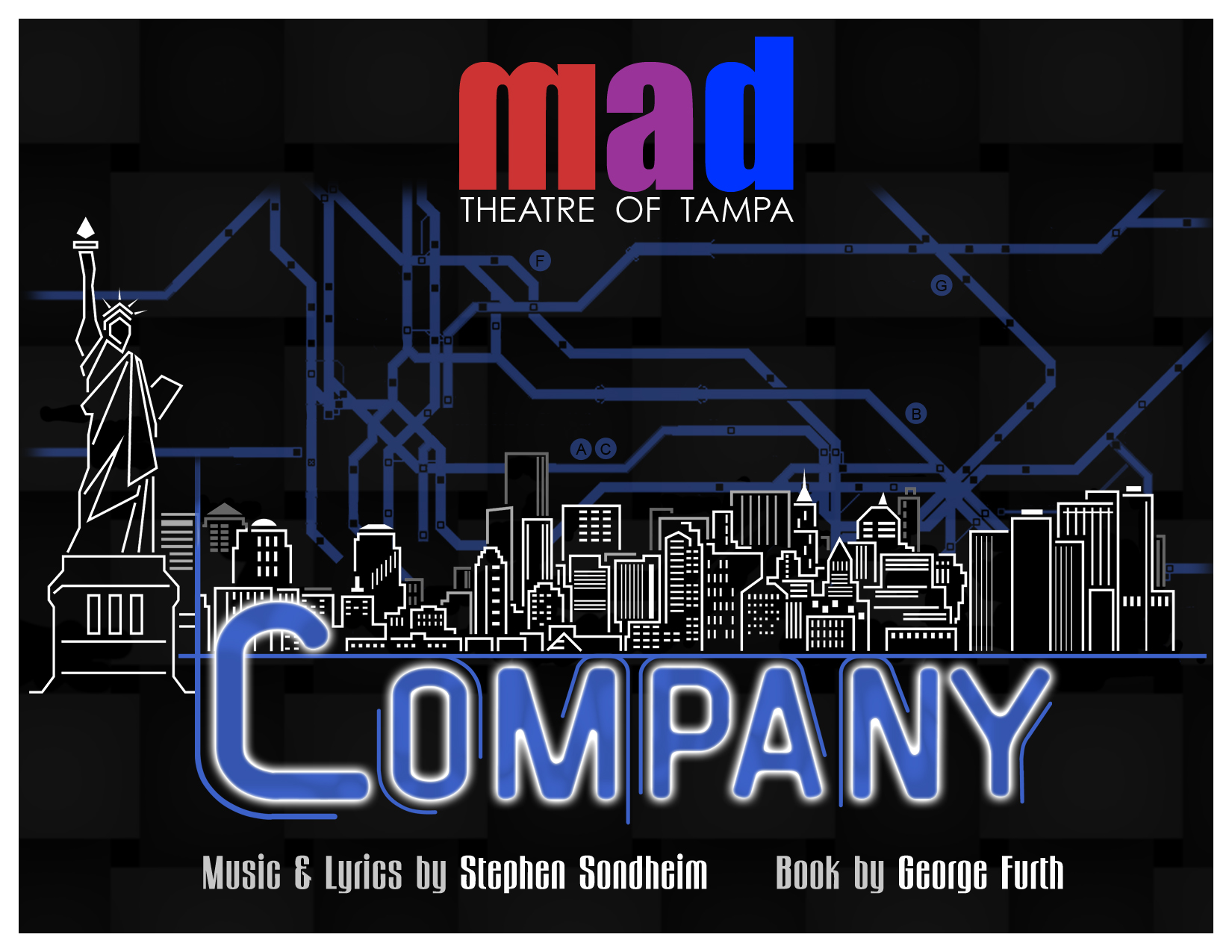 On the night of his 35th birthday, a confirmed bachelor, Robert, contemplates his unmarried state. Over the course of a series of dinners, drinks and even a wedding, his friends – “those good and crazy people [his] married friends” – explain the pros and cons of taking on a spouse. The habitually single Robert is forced to question his adamant retention of bachelorhood during a hilarious array of interactions. It was a sweaty, stinky mess lingering beneath swaying light bulbs and an odd sense (scent?) of danger – bathrooms not necessarily included. At least that was the hurry-up-and-wait feeling that I got upon my arrival via tarnished spaceship in Orlando in 1997, plopped down in the middle of theater festival without a theater or air conditioning. The Orlando Fringe never existed on pretense, though, so postscript stands second only the euphoria of the moment, right next to that strange guy looking at you like you’re a strange guy, then laughing and the barriers being broken on stage. Orlando and Fringe were a match made in heaven. In the late ‘90s, the Fringe stood in stark contrast to the Lou Pearlman boy-band brigade seeking to whiten the city’s teeth. It was Haight-Ashbury more than hating ass-berries, and as such, it was the de facto cultural clutch the city needed.

Make no mistake, the Orlando Fringe is this town’s matted underdog made good. For every quizzical glance into maladroit disorders and kinky extroversion, there have always been bright eyes staring toward trails of glitter lighting up the path to the colors of its venues, the talent of its participants, the magic of theater on a shoestring. It’s a messy affair, but most good things are. It’s also the place where performance comes from: within not without. And as such, Orlando’s Fringe festival, the longest winding road in this country (if you don’t count actual roads but only the histrionic ones), it’s earned its place in Central Florida’s kaleidoscopic pantheon.

END_OF_DOCUMENT_TOKEN_TO_BE_REPLACED

The outrage of transgender community over revisionist ‘Stonewall’ film

The Wonderful World of Wanzie: Thank God for the Godless! On Thursday January 11, 2016, scientists announced they had finally discovered “Gravity Waves,” which Albert Einstein insisted existed exactly 100 years ago when in 1916 he formally presented his Theory of Relativity. It took a full century for the science to catch up to the vision and brilliance of Einstein’s magnificent mind, but as of mere weeks ago, his hundred year-old “theory” is no longer that. It has been proven. It is fact.

END_OF_DOCUMENT_TOKEN_TO_BE_REPLACED

Panasonic a pioneer for LGBT rights in Japan

Much of Asia remains far behind the West in such attitudes. Panasonic’s move is rare, although bold, and seems unlikely to herald a sea change.

END_OF_DOCUMENT_TOKEN_TO_BE_REPLACED

Foster-care agencies step up efforts on behalf of LGBT youth

Catholic soul-searching in Ireland over vote on gay marriage

The tumult in the community over big changes happening to the St. Petersburg Pride Festival and Parade can simmer down a bit: It appears St. Pete Pride isn’t going anywhere in 2016.

There is no doubt a shift on the horizon, with chatter that Pride is moving the parade and festival to Downtown or possibly the new pier once it is completed, which is estimated for fall 2018. And there’s a possibility St. Pete might be building to become a candidate to host World Pride in the near future, which will take a literal village (or city) to make happen.

END_OF_DOCUMENT_TOKEN_TO_BE_REPLACED

Contest will determine the look of St. Pete Pride’s theme

Oscar night is often filled with award shocks and surprises and the 88th Academy Awards did not disappoint as Sam Smith becomes the first openly gay man to win an Oscar. Well, okay so he wasn’t, but he wasn’t sure about it so he said it anyways.

Sam Smith was among the winners considered an upset by Oscar experts. The winner of the Best Original Song for “Writing’s on the Wall” from the James Bond film Spectre was as shocked as the rest of the viewing world when his name was called instead of Lady Gaga and Diane Warren for the emotional song “Til It Happens to You” from The Hunting Ground, a documentary about campus rape in the United States.

END_OF_DOCUMENT_TOKEN_TO_BE_REPLACED

The Authentic Life: Sarah Paulson on defying labels, pressure to be an LGBT activist and missing Jessica Lange

Screened Out – The Imitation Game

Win a VIP Divas of Drag prize package from Watermark!

Watermark is giving away a VIP experience for Divas of Drag when the show hits House of Blues April 10!

END_OF_DOCUMENT_TOKEN_TO_BE_REPLACED

The Authentic Life: Sarah Paulson on defying labels, pressure to be an LGBT activist and missing Jessica Lange

Win a pair of tickets to Sister Act!

Few filmmakers write LGBT stories with equal parts humor and heart and even fewer are able to take that story to cult status, but one who seems to do it with ease is Del Shores, writer/director of the successful 2000 cult film Sordid Lives. Shores is heading to The Cuban Club in Ybor with his one man show, SINgularly SORDID, where he talks about politics, religion and returning to the dating world after getting divorced in his 50s. Tinder and Grindr and Scruff, oh my! Shores was gracious enough to speak with Watermark ahead of his Tampa Bay show about Oscar diversity, election coverage and a much talked about sequel in the Sordid franchise.

SINgularlySORDID is your one man show that you are bringing to Tampa. What can we expect to see from you?
I always consider myself a storyteller or a humorist: I observe, I sometimes steal from my own life and other people’s lives and talk about it on stage. This piece has become very personal, because I have gone through a divorce in my 50s and getting back into the dating scene has been crazy, so a lot of that is the SINgularly Sordid part of this. I just tell tales about Leslie Jordan and Dolly Parton and people I have had encounters with, good and bad. I love politics and controversy. My dad was a Southern Baptist preacher, so we’ll cover religion.

END_OF_DOCUMENT_TOKEN_TO_BE_REPLACED

The Book of Mormon invades Florida, and brings legions of LGBT fans with it

#wearewithher: Watermark’s presidential primary endorsement along with some other candidates and races to watch in the coming months, local news, celebrity interviews, and much, much more!

END_OF_DOCUMENT_TOKEN_TO_BE_REPLACED “My favorite thing about Candace is she has a beautiful heart,” Melissa says. “She has so much love in her, and not just for me but for everybody—and it just shines.”

Candace Salemi, who is a senior higher education specialist, and Melissa Crispo, who is a musician/songwriter and paramedic, hung out in the same circle of friends for 15 years. Candace came to see Melissa perform regularly, but they only ever considered themselves acquaintances.

END_OF_DOCUMENT_TOKEN_TO_BE_REPLACED

The tender activist: Why Bernie We’ve often heard the phrase “survival of the fittest” bandied about to the point that it is a concept we readily accept. But in his epiphany-fueled book Life’s Operating Manual, comedy film director Tom Shadyac points out Charles Darwin only used this phrase “twice in The Descent of Man but used the word love 95 times.” Darwin actually emphasizes mankind’s ability to cooperate and sympathize as keys to our survival – physically we’re inferior to many beings on the planet, so it stands to reason.

My guess is our most easily accessed emotions, fear and anger, have distanced us from Darwin’s reality. Industrialization and technology have left most of us ill-equipped to survive in actual nature. Through conditioning and training, we have arrived in 2016, collectively, as a reluctantly-huddled mass of selfish fucks.

END_OF_DOCUMENT_TOKEN_TO_BE_REPLACED

Viewpoint: The Other Side of Life, Property Axes

Why the Kim Davis story needs to be told
Previous Page