In these very pages one year ago we proclaimed 2016 to be the worst year ever. It started off with so much promise and optimism, with the official passing of the torch as the former owner of Watermark turned the reins over to new owner Rick Claggett and Watermark Media became Watermark Publishing Group.

President Barack Obama was heading into the final year of his second term and everything seemed in place for another torch to be passed, that of the first black president passing the country off to the first female president.

END_OF_DOCUMENT_TOKEN_TO_BE_REPLACED

Watermark’s Most Remarkable People of 2017 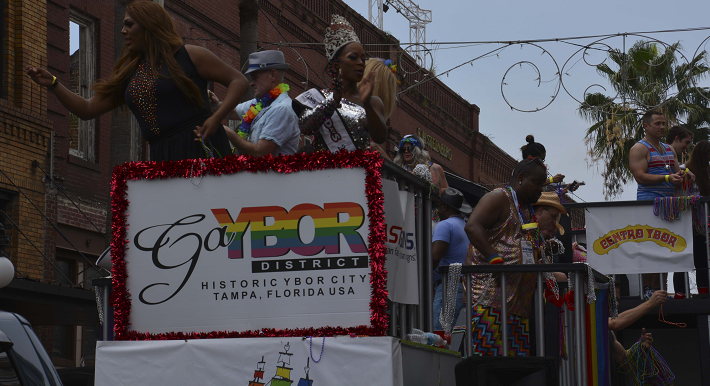 “Tampa Pride is in several parts this year,” says Carrie West, Tampa Pride’s president. “The Main Stage area, which is at the Hillsborough Community College –Ybor City Campus parking lot – will kick off first thing with the Tampa Pride Marching Band to introduce everybody and play some tunes to get everyone warmed up.”

END_OF_DOCUMENT_TOKEN_TO_BE_REPLACED

Students march for their lives at the fourth annual Tampa Pride

St. Petersburg and Tampa were named among the “Queerest Cities in America 2017” by The Advocate. What makes them so queer you may ask? Well lucky for you The Advocate gave the criteria they looked at to decide; everything from how many lesbian bars and Trans Pride parades the town has to how many theaters were showing Moonlight and hosting the music group Pwr Bttm.

Tampa came in at number 19, called Florida’s more “cosmopolitan” city (The Advocate hasn’t decided if Tampa is a Carrie or Samantha yet). According to The Advocate, this is where the young people flock to getting their education vibe on at the University of South Florida and Tampa University. They also mentioned the non-stop party of the GaYBOR district.

END_OF_DOCUMENT_TOKEN_TO_BE_REPLACED

Ybor City is a grand place. Part historical artifact from a more romanticized time, part party destination and all holiday spirit complete with street parades and fantastic festivals. The man behind the holiday magic of Ybor is Mathieu Stanoch.

“We got started seven years ago with the Historic Holiday Spirit by decorating the streets of Ybor,” Stanoch recalls. “Now, with the support of GaYbor District, Centro Ybor and the Ybor City Development Corporation, we have the parade and the snow, it’s beautiful.”

END_OF_DOCUMENT_TOKEN_TO_BE_REPLACED

Shrine to tolerance: An altercation in Ybor City turns from discrimination to compassion

Shrine to tolerance: An altercation in Ybor City turns from discrimination to compassion

TAMPA – The Ancient Egyptian Arabic Order Noble Mystic Shrine, better known as the Shriners, invaded the streets of Tampa for their annual Imperial Session conference Aug. 15-18, during which time an incident of discrimination turned into a declaration of LGBT support.

Mathieu Stanoch, the visual director at Honey Pot and president of Ybor’s Historic Holiday Spirit, was shopping at the local 7-11 on 7th Ave. in Ybor Aug. 15 when a man in a Shriners shirt came into the store.

END_OF_DOCUMENT_TOKEN_TO_BE_REPLACED

Tampa Pride looks to spark some of that magic from last year’s inaugural event, but Pride existed in Tampa prior to GaYbor’s incarnation

Carrie West, President of Tampa Pride, has been around for a long time, and there are many things he is proud of in his more than 30 years in the Tampa Bay area.

He moved to region in the early 1980s with his partner Mark Bias, who is also the secretary of Tampa Pride, to attend the University of South Florida, and since then they have had their hands in many endeavors. One of which is GaYbor.

END_OF_DOCUMENT_TOKEN_TO_BE_REPLACED

Tampa – The City of Tampa has signed an agreement to provide $35,000 worth of in-kind city services to the new Tampa Pride celebration scheduled for March 28, 2015. The co-sponsorship is a real victory for Tampa Pride, Inc. not only because of the boon it will give the planning of the celebration, but because it’s the first sponsorship the city has given since a 2009 moratorium was placed on financially supporting new festivals.

Initially, the City denied Tampa Pride’s request for a co-sponsorship, but meetings with LGBT friendly mayor Bob Buckhorn made the support possible.

END_OF_DOCUMENT_TOKEN_TO_BE_REPLACED

Will Gulfport elect an openly gay mayor or a straight, gay-friendly mayor?

Overheard in Tampa Bay: Do you know who is the mystery speaker? (We do.)

Updated Mystery Date Game
It almost feels like a game of the legendary “Mystery Date” as we wonder who will greet us at the door or in this case, from the stage. It’s still five months away, but the St. Petersburg community is already buzzing about the Greater St. Petersburg area Equality Florida gala scheduled for May 3. Watermark has been told in the strictest confidence by organizers who is scheduled to speak at the Mahaffey Theater that night, but we can’t share the person’s name just yet because details are still being finalized. We were told by Equality Florida’s Todd Richardson, however, that we can release the name in the Jan. 16 issue of Watermark. Several in the community already know which nationally known guest speaker plans to attend, but it’s not official, as they say, until all the I’s are dotted and the T’s are crossed, which is interesting since this guest uses both letters when penning a signature. (See what we did there’s clues, but weak clues.) Take our word, you’ll want a ticket to this one!

Bingo gets Quenched
For the past several months, Kori Stevens and Muffy Van Beaverhausen have made patrons of Quench Lounge crack up as hostesses of Drag Queen Bingo at the popular Largo bar. But the end of 2013 also marked the end of this new tradition, when Stevens hosted the final Drag Queen Bingo at the bar. There are few details about why the Bingo craze isn’t sticking at Quench Lounge, but Anjila Cavalier, entertaining during a fundraiser on Dec. 28, shared with the audience that Stevens is moving onto “the next phase” of her career. Unfortunately, the bar reports that Muffy couldn’t be at the final bingo because of a scheduling conflict, but the prizes and drink specials were flowing strong all night long.