In SC, Buttigieg faces some black voters wary of a gay candidate 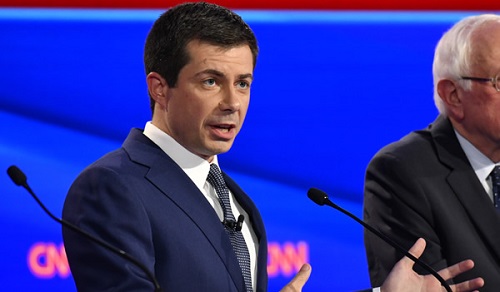 CONWAY, S.C. (AP) | South Carolina state Sen. Gerald Malloy is fine with a gay presidential candidate like Pete Buttigieg. His older male relatives are not, and that may be the defining challenge of Buttigieg’s campaign.

As Buttigieg tries to sustain his early success in Iowa and New Hampshire, he has to prove that he can win over African American voters, who make up the vital core of the party base. A relatively small but nonetheless influential number of black South Carolinians may be resistant to him because of his sexuality.

“He’s got to convince people like my dad and my uncles, when they still unfortunately subscribe to stereotypes,” said Malloy, who is black and lives in Hartsville, a small town in rural northeast South Carolina with a black population of almost 50%.

A poll commissioned by Winthrop University in Rock Hill, South Carolina, this month found that it made no difference in the decision-making to 79% of African American voters if a candidate for president is gay. The number was only slightly lower than white voters. Conversely, 16% of black voters said they’d be less likely to support a gay candidate, slightly higher than white voters, at 13%. But in a primary race with several candidates, that small percentage could make a major difference in the outcome.

Buttigieg is appealing for the support of black voters in part as a person guided by Christian faith and in part as a matter of inclusiveness. That approach worked among Iowa’s and New Hampshire’s vastly white electorates, where he finished in the top two. A poor showing in South Carolina, where black voters could make up two-thirds of the Democratic primary electorate, might suggest that he cannot win over black Democrats.

Buttigieg has been careful not to equate the struggle for acceptance among gays to that of African Americans seeking equality and civil rights. At the same time he has tried to reach voters with a message of belonging, with the hope that it resonates in the state’s robust Christian community.

“I think for those who haven’t quite found their way all the way to the right side of history, it’s important to beckon them in the right direction,” Buttigieg said during a CNN town hall last week, “instead of clubbing them over the head and telling them they’re bad people until they see it just the right way.”

Buttigieg’s sexuality reappeared in the campaign when Rush Limbaugh said on his radio show that “America’s still not ready to elect a gay guy kissing his husband on the debate stage.”

With faith-minded South Carolina voters paying closer attention now, Buttigieg held up his marriage as an example in contrast with President Donald Trump, the thrice-married billionaire who has been shadowed by accusations of infidelity and sexual assault.

The defiance betrays the more subtle approach Buttigieg takes in courting black voters in South Carolina and referencing his Christian faith, often discussing a passage from the Book of Matthew.

“Whatever happened to, ‘I was hungry and you fed me? I was a stranger and you welcomed me?”’ Buttigieg told the audience at the South Carolina Democratic Party Convention in Columbia last June, invoking Scripture’s metaphors for child welfare and immigration.

Buttigieg’s team hasn’t focused on winning over voters resolutely opposed to him based on his sexuality. “It’s not something we spend a lot of time thinking about,” Buttigieg’s national campaign spokesman Chris Meagher said. “He is who he is.”

And yet, the discomfort lingers in the minds of men like Henry Baldwin at an evening service at Mason Temple Church of God in Christ in Conway on Sunday.

Buttigieg’s campaign has discussed internally the importance of reaching black women of faith, hoping his message of inclusiveness outweighs discomfort with his sexuality. There are at least some signs that it has.

The Rev. DeMett Jenkins, an associate minister in Charleston, South Carolina, said she was drawn to Buttigieg’s eloquence, calm and intellectual depth, but sold by the faith he projects.

“I just don’t see him spending time trying to convince people to accept his sexuality. Nothing he says is going to matter unless they have a change of heart,” Jenkins said. “What I hear is a man who seems to care about all people, truly is guided by his integrity, his principles in life and his spirituality.”

Yet there there remains an intransigence, even among the black women Buttigieg is targeting.

“I just can’t see him being a representative for the United States of America,” said Karen Wilkerson, a 69-year-old retired teacher from Cheraw. “When you think about all of the state things that he has to attend to, being in the public eye in a foreign stage and having to have the company of his partner with him. I guess, coming from my era, my age, it just bothers me. I don’t think I will vote for him.”

Some African American pastors such as the Rev. Titus Thorn say Buttigieg’s sexuality hasn’t deterred congregants. He said those attending his small parish in Rock Hill have considered Buttigieg’s candidacy, though he does hear a common refrain of doubt.

“Individually, people say, ‘I’m not opposed to him,”’ Thorn said. “But they worry America’s not ready for it.”

The bigger problems in South Carolina for Buttigieg, the former mayor of South Bend, Indiana, may be that he has not campaigned frequently in the state and that many black voters mainly know him by the criticism of his city’s police relations with minority residents, said former South Carolina state Rep. Bakari Sellers.

“Pete’s problem with black voters is not that he’s gay,” said Sellers, who has not endorsed a candidate. “The reason not that many black folk are with Pete is they don’t know him, and by virtue of that, they don’t trust him.”

Though there’s less than a week to convince voters, Buttigieg seemed aware of Sellers’ point as he addressed hundreds at a Baptist church banquet hall in North Charleston Feb. 24.

“I also know when I am asking voters, and in particular black voters, to trust me in this election,” Buttigieg said, “that I’m asking someone who has perhaps never met me to trust me with their lives.”

In endorsing Buttigieg in an editorial posted Feb. 24, Columbia’s daily newspaper The State said Democrats needed “an energetic, disciplined candidate who can offer voters a powerful yet pragmatic vision of a better America” and bring people together.

The paper also said: “Too often Buttigieg’s critics have ignored his substantive efforts to earn the support of black voters, and Buttigieg’s appeals to African Americans should be judged by this standard: Is his outreach genuine, and is it being undertaken in good faith?”