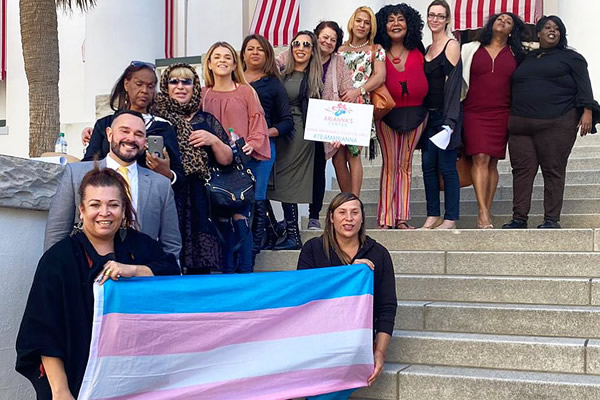 ABOVE: Arianna’s Center staff and supporters attend their organization’s lobby day at the Florida State Capitol on Jan. 28, 2020. (Photo courtesy of Tony Lima)

The founder of a South Florida organization that serves transgender women says her goal remains to change her clients’ lives “in a good way.”

Arianna’s Center CEO Arianna Lint, during an interview with the Washington Blade last month at the National LGBTQ Task Force’s annual Creating Change conference in Dallas, said her organization is “the first resource for transgender” people in Florida who are in U.S. Immigration and Customs Enforcement custody and once they are released.

Lint said a combination of grants and private donations allows Arianna’s Center to purchase bus tickets to Florida for trans women after ICE releases them from their custody. Arianna’s Center also provides them with housing, monthly bus passes and access to free health care and English classes so “they can continue their lives.”

“We have to provide everything,” said Lint. “We don’t pay them, but we give them transportation … we put them in school. We try to find them stable housing. We find them a free doctor.”

Lint, 47, was a lawyer in her native Peru before she moved to the U.S. in order to complete her transition. Lint opened an escort service when she was living in New York.

“It gave me the financial life to continue my life, pay my bills,” Lint told the Blade.

Lint moved to Florida after Sept. 11 and opened a construction company in Orlando. Lint told the Blade she “had a relationship and everything, and then” she tested HIV positive.

“It was a very big shock for me,” she said. “I left my own business and everything.”

Lint was a volunteer at an Orlando HIV clinic before she became a full-time employee. Lint worked for the Florida Department of Health before Sunserve, a Fort Lauderdale-based LGBTQ organization, in 2013 hired her as its trans director.

“I decided to step out and open my organization because I saw in South Florida there were no trans-led agencies,” Lint told the Blade.

Arianna’s Center, which is based in Wilton Manors, offers a variety of programs to its trans clients. These include home testing and linkage to care for those who test positive.

Lint told the Blade her group conducts needs assessment, and encourages clients who are negative to go on PrEP. Lint also said many of Arianna’s Center’s clients are homeless, sex workers and survivors of domestic violence.

Arianna’s Center partnered with Human Rights Watch on its report about trans women of color who live in Broward and Miami-Dade Counties. Arianna’s Center also worked with the Transgender Law Center on a Florida and national survey about trans issues.

Lint is a board member of the Trans Latin@ Coalition, a California-based group that advocates for trans immigrants and other groups around the country.

Puerto Ricans with HIV are among the vulnerable groups that Hurricane Maria left even more at-risk after it devastated the U.S. commonwealth in September 2017. Arianna’s Center began to work in Puerto Rico a few months later.

Lint told the Blade many Puerto Ricans with HIV come to Florida to receive treatments that are not available on the island. AIDS Healthcare Foundation, Borealis, Gilead Sciences, AIDS United, the Elton John Foundation, the Southern HIV Impact Fund and Miami Dolphins: Football Unites are among the organizations that have given Arianna’s Center funds to expand its work.

“They tell us what’s happened in Puerto Rico, so that was of interest for us to go to Puerto Rico and start working over here,” said Lint, referring to Puerto Ricans with HIV with whom Arianna’s Center works.

Casa Ruby CEO Ruby Corado is among those who Lint considers a “mentor.”

Corado in a statement to the Blade said Lint’s “hard work and perseverance has evolved in building a center that is the life-saving key for many Florida and Caribbean trans people.”

“Her work is priceless,” said Corado.

“Arianna Lint is an example of possibility in the trans community,” Salcedo told the Blade. “Through hard work and determination, Arianna has been able to build a great center and be one of the leaders of the trans community in Florida and across the nation.”

Lima said Lint “inspires me on a daily basis.”

“She is the consummate advocate, who goes above and beyond to ensure that trans women of color are represented, included, protected and empowered to fight the discrimination they face daily,” Lima told the Blade. “She leads with passion, dedication and love and for this reason she is not only respected throughout Florida but also across the country.”