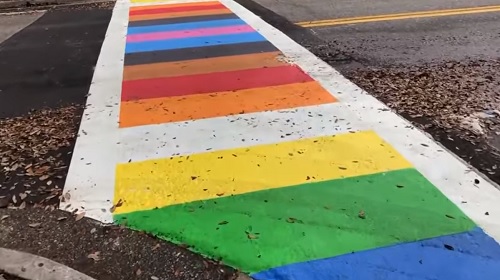 The City of Sarasota unveiled a multi-colored crosswalk some residents see as LGBTQ affirming on Feb. 14.

“COLORFUL CROSSWALK,” the city shared via social media along with a video. “Our Public Works crew painted this vibrant crosswalk overnight in the 1500 block of Main Street. It’s part of our ongoing effort to enliven downtown and make it more pedestrian friendly. What do you think?”

Watch the video below:

Watermark contacted city officials to inquire if the crosswalk was painted in direct support of Sarasota’s LGBTQ community and was referred to City Manager Tom Barwin’s weekly newsletter, also released Feb. 14. “The design is a simple display of vertical bars painted in a spectrum of colors symbolizing Sarasota as a welcoming community,” it reads.

“Similar designs have been fabricated in crosswalks in cities around the country, and this one in downtown Sarasota is timely, with the thought provoking Embracing Our Differences art exhibit on display at nearby Bayfront Park through April 5,” it continues. “As our special city on the cultural arts coast becomes more pedestrian-friendly, we’ll continue to explore creative uses of space, such as crosswalks, to engage and stimulate walkers. Let us know your thoughts at CityNews@SarasotaFL.gov.”

When asked to clarify if the city’s stance was that the crosswalk was LGBTQ affirming, officials advised “Our stance is that we’re a welcoming, inclusive community.”

Area advocates celebrated the crosswalk after it was unveiled, including the LGBTQ chorus Diversity: The Voices of Sarasota. The organization echoed the excitement of board member and Sarasota OUT’s Joshua Beadle.

Joshua Beadle is a member of the Diversity board. Your Diversity friends are soooo proud of you and the tireless work…

Posted by Diversity: The Voices of Sarasota on Friday, February 14, 2020

The city further advised that the crosswalk was painted by staff during regular hours, with minimal cost for paint and supplies. “We just painted over an existing crosswalk and will be testing the durability of the special thermoplastic and street paint,” they responded to one resident’s concerns.

To check out Watermark’s extensive Sarasota coverage, be sure to read our annual Sarasota Living with Pride.

French town uncouples with its Polish twin over LGBTQ rights

ALSO Youth starts up 16 and under transgender support group