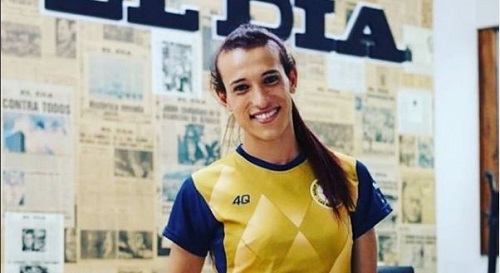 BUENOS AIRES, Argentina (AP) | Dozens of trophies, balls and cups sit on two worn, wooden shelves in the small home in a Buenos Aires suburb of Mara Gomez, who is poised to become the first transgender woman to play professional soccer in Argentina.

Tall and athletic, Gomez looks at the mementos from her arduous journey in soccer and life, and smiles. “When I started I was so bad. I’d kick the ball at the goal and it would go anywhere.”

Gomez spent years playing in local women’s leagues in Buenos Aires province before being signed recently by Villa San Carlos in the first division. Now the 22-year-old forward is awaiting the Argentine Soccer Federation’s decision whether to authorize the signing in a soccer-mad country that has produced some of the world’s greatest stars, from Lionel Messi to Maradona.

Besides soccer fame, Argentina has also become a regional leader in transgender rights. In 2012, it gave people the freedom to change their legal and physical gender without having to undergo judicial, psychiatric and medical procedures.

The federation’s decision on Gomez could come in days, and in the run-up her cellphone pings constantly with messages from people reaching out to her. While many support her bid to play professional soccer, others contend it is unfair to the non-transgender women in the league.

“The rights of transgender athletes and the social demands to integrate them into competitions challenge and seriously threaten the rights of women in sports,” said Juan Manuel Herbella, a former soccer player who is a sports doctor. “Athletes who were born men, if they maintain their base conditions, start with an enormous advantage.”

Juan Cruz Vitale, the Villa San Carlos coach, rejects the idea that Gomez would have an unfair advantage.

The coach said she caught his eye with her speed and her scoring in two straight tournaments. But, he said, “If we talk of strength, I have at least five or six girls who are stronger than her. On that side I don’t see that there is an advantage.”

Amid the controversy, Gomez recalls how at age 10 she began to ask questions. “I realized that I wanted to be a woman because I liked men and I wanted them to see me in another way.”

She said at 13 she told her mother, Caroline, that she was going to lose her only son. She told her: “I want to be a woman and if you don’t accept it, I am going to leave home.”

Though her mother accepted her, Gomez said she was tormented by discrimination after assuming the gender she identifies with and was on the brink of taking her own life. Then, she found soccer. She started playing in a vacant lot in front of her house next to her neighbors.

“I used it as a therapy, me trying to accept myself,” she told The Associated Press in the house in the suburb of La Plata she shares with her mother and four younger sisters. “There was a mound of emotions that were making me psychologically unwell. I realized that when I play soccer this mound disappeared.”

On her journey she says she has suffered discrimination and complaints about her participation.

One of her worst days came during a lightning tournament. “They put me on defense but I didn’t know how to play well. I put a goal in my own net. When the first half ended I found out the other team had complained that I shouldn’t play because I put them at a disadvantage. They considered my sexuality a disadvantage for them even though I was playing so poorly.”

Gomez learned to live with the insults from fans and the complaints when at age 18, backed by the law, she got her new identity card.

“Now I had the identity that I saw myself as having. This gave me the confidence to be who I am,” said Gomez, who has a soccer ball tattooed on her leg and keeps her long hair tied back when she plays.

The requests for interviews she has been getting recently have forced her to alter her routine of soccer training and working shifts as a manicurist and hair-straightener, which she does to make a living while studying nursing.

Villa San Carlos is in last place in the current first division tournament and is fighting to not descend a division.

Argentina’s soccer federation has no regulations about transgender athletes, so doubt remains about what it will say amid the debate over whether transgender women should play in professional women’s leagues.

The federation declined AP requests to comment on Gomez’s case.

“On the field, you can have speed and strength, but that doesn’t help you if you don’t know how to play football,” Gomez said. ”I always hold up the example of Messi … He measures 1.6 meters (5 foot, 7 inches) and is the best player in the world.”

She models her play on that of Dario Benedetto, formerly with Argentina’s Boca Juniors and now with France’s Olympique de Marseille, and Florencia Bonsegundo, who plays with Valencia in Spain.

Some specialists have said that a higher level of testosterone in some transgender women gives them greater muscular power and an advantage in women’s leagues.

The soccer federation’s decision will take into considerations the rules set out by the International Olympic Committee for transgender athletes. In the case of male-to-female transgender athletes they will need to demonstrate that their testosterone level has been below a certain cutoff point for at least one year before their first competition.

Gomez said she dreams of playing with Boca Juniors, her favorite team, and on the Argentine national team. She says she also hopes she serves as an inspiration for other transgender people who in spite of recent advances still suffer violence and discrimination.

“We have to continue changing society so we are seen as people,” she said.

The 49 Fund is accepting applications for 4th annual scholarships

Parliament House owner says the resort is not up for auction