By : John Paul King of the washington blade, courtesy of the national LGBT media association
Comments: 0 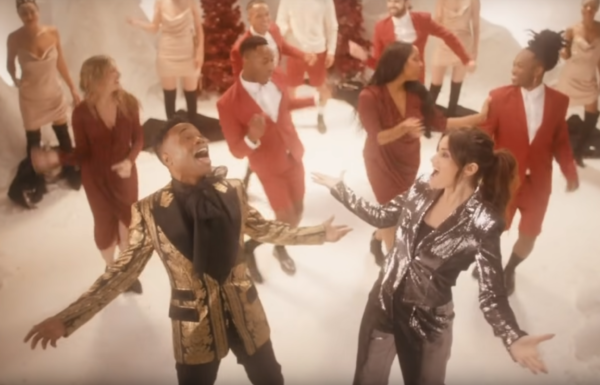 ABOVE: Billy Porter and Idina Menzel keeping warm in their new video duet (Image via YouTube)

As Christmas approaches each year, it comes with the anticipation (and maybe also the dread) of the next glittery, fabulous new holiday single to be dropped by a pop star.

This season has already brought us Sam Smith’s rendition of Donna Summer’s classic “I Feel Love” (okay, not exactly a Christmas song, but coupled with those Target holiday commercials it seems as festive as “Jingle Bells”), but the winner might just have landed under our trees courtesy of not one, but two of Broadway’s brightest lights.

Tony Award-winning stage superstars Idina Menzel and Billy Porter joined their considerable forces to record a duet of the Irving Berlin-penned wintertime standard, “I’ve Got My Love to Keep Me Warm.” The Emmy Award-winning star of “Pose” and the voice of Elsa in Disney’s mega-hit “Frozen” (and the new Disney mega-hit, “Frozen 2”), who both performed at this year’s Macy’s Thanksgiving Day Parade, posted a video for the classic tune in which they put both their spectacular talents on full display.

The video opens with Menzel thawing out, Elsa-style, a frost-covered group of holiday-dressed dancers, who proceed to make merry around her as she delivers her rendition of the song. Then she turns things over to Porter, who has his own set of festive frolickers to accompany him as he takes his own smoking-hot turn through it. The pair then joins together for a duet on a third and final go-round of the tune that is sure to have even the Grinchiest among us feeling their tiny little hearts growing three sizes larger.

The track is featured on Menzel’s new album, “Christmas: A Season of Love,” on which she also performs duets with Ariana Grande, her husband Aaron Lohr and fellow Broadway veteran and “Frozen” franchise alum. You can find those tracks, along with the rest of the album, on Spotify and Apple Music right now.

Porter is set to join Menzel onstage for a Dec. 11 concert at New York’s Carnegie Hall. They will also appear together in the upcoming new film version of “Cinderella,” coming in 2020.

“I’ve Got My Love to Keep Me Warm” was penned by Berlin – who was also the man behind “White Christmas” – in 1937, when it debuted in the Broadway show, “On the Avenue,” and it is considered part of “The Great American Songbook.” Many popular singers have covered it on hit recordings, perhaps most notably jazz by greats Ella Fitzgerald and Louis Armstrong with their duet version on the 1957 album, “Ella and Louis.”

The reigning queen of Broadway, Idina Menzel, is on top of the world and she isn’t letting it go anytime soon