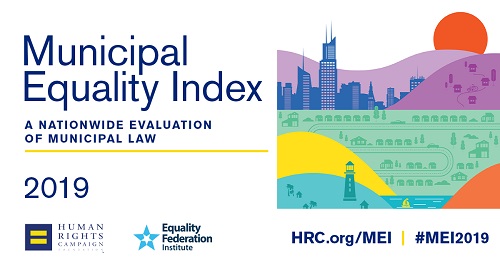 The Human Rights Campaign (HRC) announced Nov. 19 that the cities of Orlando, St. Petersburg and Tampa each received a perfect score of 100 in the organization’s eighth annual Municipal Equality Index (MEI).

The MEI examines how inclusive municipal laws, policies and services are for LGBTQ people who live and work in the 506 cities rated. The score is based on non-discrimination laws, the municipality as an employer, municipal services, law enforcement and the city leadership’s public position on equality.

“Cities and municipalities are meeting and exceeding HRC’s inclusion standards with innovative measures to protect LGBTQ people,” HRC shared. A record 88 cities across the U.S. earned the highest possible score – up from 78 in 2018 and only 11 in 2012, the MEI’s first year.

Orlando Mayor Buddy Dyer celebrated the news via social media. “We should all be proud that City of Orlando has once again obtained a perfect score in the Municipal Equality Index,” he wrote. “Our community is welcoming and inclusive and as a city we remain committed to continuing to promote diversity and equality in everything that we do.”

“We are incredibly proud to have received a perfect score for the fifth year in a row,” St. Petersburg Mayor Rick Kriseman tells Watermark. “It is a reflection of our values and policy advancements and serves as a vital message point for us when recruiting people and businesses to our city.

“We recognize that building an inclusive city never ends,” he continues. “There’s always work to do. We are committed to this work and ensuring that LGBTQ residents and visitors forever view St. Pete as a beacon of progress. Thank you to HRC for this program and accountability, to my city team, and to our residents for making sure the sun shines on everyone in St. Pete, regardless of who you love.”

“For the fifth consecutive year, our city demonstrates its continuing commitment to equality for the LGBTQ community and for all that live in our great city,” St. Petersburg LGBTQ Liaison Jim Nixon adds. “With the passage this year of our citywide anti-bullying policy that includes sexual orientation and gender identity and gender expression in all youth facing services and the resolution to include LGBTQ businesses in the city’s Small Business Enterprise, we have committed to the work that keeps our city on the path to equality.”

We did it again! Thanks, Jim. Thanks to @HRC for this program and accountability, to my city team, and to our residents for making sure the sun shines on everyone in St. Pete, regardless or who you love. https://t.co/GmSj7TShOg

“It’s no surprise to me that the City of Tampa has once again received a perfect score on the Human Rights Campaign’s Municipal Equality Index’s Score,” Tampa Mayor Jane Castor also shared.

“Tampa was founded on our diversity and that diversity is inclusive and welcoming to all,” she continued. “I’ve said it before and I’ll say it again, it is my hope that someday we will reach a point where everyone is judged by the content of their character rather than the color of their skin; that no one loses their life because of the God they worship; that who you love does not matter as much as that you love and are loved.”

“These inclusive and welcoming cities are standing up to the unrelenting attacks on the LGBTQ community by the Trump-Pence administration, and sending a clear message that the fair and equal treatment of our community, our families and our neighbors is a true American value,” HRC President Alphonso David said in a statement. “This year’s MEI shows that across the country, city leaders are working tirelessly to ensure that their constituents can secure housing, make a living and participate in community life without being discriminated against because of who they are.”

To view the HRC’s full report, visit HRC.org/MEI. You can view Orlando’s scorecard in its entirety here, St. Petersburg’s here and Tampa’s here.

We look back on 2018, a midterm year for a country that’s just living on a prayer