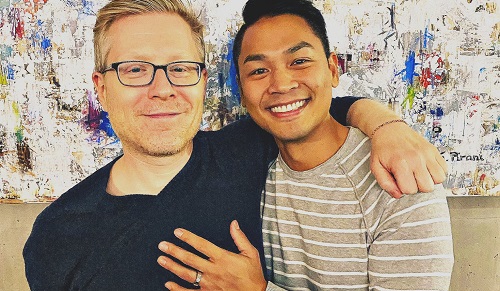 Out actor Anthony Rapp is marrying his boyfriend, and he wants everyone to know about it.

The 48-year old Rapp went on social media Sunday to tell fans and followers he had proposed to partner Ken Ithiphol, saying: “So something happened tonight. I asked Ken if he would marry me and he said yes. I am so very happy and I’m so very thrilled to share this news.”

So something happened tonight. I asked Ken if he would marry me and he said yes. I am so very happy and I’m so very thrilled to share this news. pic.twitter.com/2T65DLhSmd

Thanks to our friend Noah for capturing this moment directly after the proposal. Can you tell we are a little happy???!!???!!??? pic.twitter.com/Yc0w6T2fBh

The couple on Sunday both re-posted Instagram stories from others, showing the actor down on one knee proposing to his partner in front of friends at a Toronto party.

Ithiphol is a leadership coach, social researcher and advocate.

Rapp has been an actor since childhood, making his Broadway debut in 1981 in a short-lived musical called “The Little Prince and the Aviator,” based on the beloved children’s book by Antoine de Saint-Exupéry, and his film debut with 1987’s “Adventures in Babysitting.” It was with the original production of “Rent” in 1994 that he first gained widespread recognition, creating the role of Mark in the now-iconic Jonathan Larsen musical and reprising the role in the 2005 film version. He has since appeared in numerous roles in theatre, television, and film, recently expanding his fanbase with the role of Lt. Commander Paul Stamet in the CBS All Access series, “Star Trek: Discovery,” in which his character, alongside fellow out actor Wilson Cruz, is half of the first gay couple in the “Star Trek” television franchise.

Rapp came out as queer in the mid-90s. At the time, he told Oasis magazine: “I don’t want to get into labels, but I’ve never labeled myself except to say I’m queer. The thing that’s been most important to me to be out about is that I have been in loving relationships with men … I haven’t said, ‘I am gay.’ Because the truth is that I’ve also been in love with women, although the truth is I do think I’m primarily homosexual.”

He made headlines when he revealed that he had been the recipient of unwanted sexual advances from actor Kevin Spacey at the age of 14, saying that he had attended a party at the home of the then 26-year-old Spacey. At the end of the evening, according to Rapp, the older actor, who was apparently drunk, picked him up and placed him on a bed, attempting to begin a sexual encounter. He had spoken about the incident in an Advocate magazine interview in 2001, but had at that time withheld Spacey’s name; inspired by the rise of the #MeToo movement, he came forward with the full story in 2017. Spacey claimed, on Twitter, not to have remembered the incident, but did not explicitly deny it, instead apologizing for “what would have been deeply inappropriate drunken behavior.” At least 14 other men subsequently came forward with similar accusations against the older actor.

Rapp has credited activist/author Larry Kramer as an inspiration, saying in a 2018 interview on “The View” that he had worked with the activist on a play as a young man.

“[He] was a really powerful force to be around,” said Rapp, “so I always thought it was really important to live an open life.”

Anthony Rapp speaks out on aftermath since Kevin Spacey allegations

The new fall season brings back ‘Will & Grace,’ and a plethora of LGBTQ characters, to the small screen