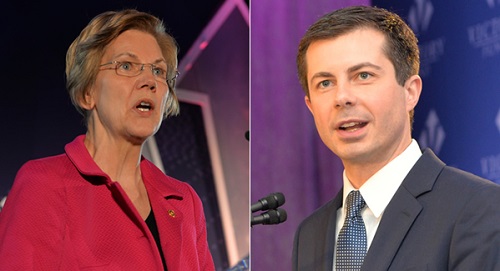 Both Warren and Buttigieg articulate wide-ranging plans for assisting the LGBT community, such as support for the Equality Act, ending the transgender military ban and allowing a third gender marker option on federal IDs for non-binary people.

“I will fight to pass the Equality Act to explicitly guarantee that no LGBTQ+ person in America is discriminated against for who they are or who they love,” Warren writes. “Today, federal law still does not expressly prohibit firing a transgender person because of their gender identity, evicting a bisexual person because their same-sex partner moves in or deliberately misgendering a non-binary student in the classroom. There should be absolutely no question that LGBTQ+ Americans have equal rights under law.”

Both Warren and Buttigieg, remarkably, name Marsha P. Johnson and Sylvia Rivera, transgender women of color who participated in the 1969 Stonewall riots, as pioneers in the LGBT movement.

“For LGBTQ+ people, like for other marginalized groups, the political has always been extremely personal,” Buttigieg writes. “This is why our policy is inspired by LGBTQ+ people’s stories: By the war that breaks out in the heart of a young person when they realize that a basic fact about them makes them more likely to be feared, and the immense joy that comes with finally knowing with certainty that you belong.”

But there’s some differences in the plans around the edges. For example, Warren pledges both to reverse the transgender military ban and beef up enforcement of federal non-discrimination law on Day One of her administration, but Buttigieg doesn’t say that in so many words. Buttigieg lays out a plan to end the HIV epidemic by 2030, but Warren offers no such timeline.

Notably, Warren explicitly names the trio of cases the U.S. Supreme Court heard just this week that will determine whether anti-LGBT discrimination is a form of sex discrimination, therefore prohibited under Title VII of the Civil Rights Act. Buttigieg, however, doesn’t bring up the cases or Title VII whatsoever.

Warren and Buttigieg, who offer starkly different plans on the campaign trail for health care reform, promote their approaches as ways to ensure LGBT people have access to medical care. Warren pledges a complete overhaul with Medicare for All, but Buttigieg has a Medicare for All Who Want It that allows individuals to keep their private health care plans.

Both candidates also have differing approaches in style. For starters, Buttigieg, who’s gay, is able to invoke his membership of the LGBT community in touting his plan.

“Twenty years ago, an awkward teenager at St. Joe High School in South Bend, Indiana, who didn’t know a single out LGBTQ+ student there, never would have imagined how far we would come as a country,” Buttigieg writes. “But what does our country look like to a teenager in 2019, just starting to realize who they are? What future do they see for themselves?”

Buttigieg’s plan also incorporates in his plan the voices of other LGBT people beside himself, such as former Defense Department spokesperson Doug Wilson.

Taking a line from her opening remarks at the recent Iowa LGBT forum hosted by GLAAD, Warren enumerates the names of each of the 18 transgender people killed this alone, almost of whom are black transgender women.

“The data in this area are so unreliable that experts believe this number underestimates the depth of the crisis,” Warren writes. “It is time for a president to say their names and honor their memory by fighting every day for a country where trans women of color can thrive free from discrimination.”

The candidates both singularly blame President Trump for anti-LGBT policies, pledging to reverse his actions once they take the White House.

The thorough plans are not unlike the comprehensive proposals from Beto O’Rourke, who made his plan public in June, and now ex-candidate Kirsten Gillibrand. In another approach, Joseph Biden, have kept things simpler by making the Equality Act his central priority and more generally promising to be a friend to LGBT people.

The candidates will likely expound on their proposals in the upcoming forum. The four-and-a-half hour event, set to air on CNN and hosted by the Human Rights Campaign Foundation, will run from 7 pm to 11:30 pm ET.

Gerald Bostock has his day in court