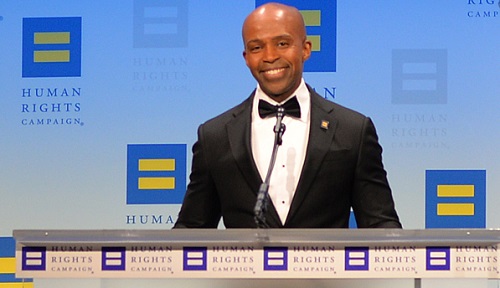 As much of Washington reels from the Ukraine-call scandal that has landed President Trump at the center of an impeachment inquiry in Congress, the new president of the Human Rights Campaign made himself a beacon of hope for the estimated 3,500 people in attendance at the 23rd national dinner.

A key component of David’s speech was identity. He began his remarks with the question, “Who are you?” then listed several identities, including immigrant, gay, transgender and straight as individuals in attendance cheered when he mentioned their identities.

But David’s speech took a turn when he said those identities “will either serve as a tool to achieve liberation and as a tool to further oppress us.”

Blaming Trump for a “moral recession,” David said Trump uses identity “as a sword and to create false hierarchies to force us into believing that we lose something by simply recognizing someone else as a human being.”

David said Trump wants people to believe recognizing others make them lose something, but the loss isn’t what Trump wants you to think.

Lighting a way forward to “weather the storm, this existential crisis that we face in this country,” David announced a trio of new initiatives the Human Rights Campaign would undertake under his new stewardship of the organization.

The first was a new transgender justice initiative, which David described before reading the names of transgender people who were killed this year.

According to the Human Rights Campaign, the effort will focus on economic empowerment; capacity-building programs; targeted task forces in communities hardest hit hard by the epidemic of anti-trans violence; and expanded public education campaigns.

“With his partnership, we fight to protect and support our right to vote,” David said. “And in so doing, we can elected a pro-equality Senate that will follow the House’s lead and pass the Equality Act. We can elect a president that will sign the Equality Act into law.”

Finally, David pledged to expand the footprint of the Human Rights Campaign — both by opening offices in New York and Los Angeles and extending legal efforts by filing lawsuits and advancing cases by national and internationally.

“Equality does not stop at our borders, Mr. Trump, and we cannot allow ourselves to be affected by your hypo-nationalism,” David said. “And as the world’s largest LGBT organization, it is imperative that we stand and stand tall with our partners in nations around the world.”

The audience, which had cheered David throughout his speech, gave him a standing ovation when he pointed out he’s the first person of color to lead the Human Rights Campaign.

“As I stand before you as the first person of color to lead the Human Rights Campaign in its nearly 40 year history, I promise you that I will fight as hard and as long as necessary to make the dream of full equality a reality for all us,” David said. “All I ask in return is that you make that same promise.”

David concluded his speech the way it began with the question, “Who are you?” But the second time around, he asked his audience to consider it differently.

“I say that whoever you are, however you identify, see yourself in the person who looks nothing like you,” David said. “Our next greatest achievement is realizing the dream of full equality for all of us, and let it begin tonight, right here in this room with each and every one of us.”

Massah David and Miatta David Johnson, the younger sisters to Alphonso David, introduced Alphonso David after a video played describing their experience in Liberia and having to flee amid conflict.

Virginia State Sen. Adam Ebbin (D-Alexandria), a gay lawmaker who was in attendance, told the Washington Blade David’s speech rang true at a challenging time for the nation.

“Alphonso David brings with him the urgency that this moment requires,” Ebbin said. “His speech was a wake up call to the privileged and complacent, and a welcome reminder of what’s at stake.”

The star of the night was gay singer Ricky Martin, who accepted the HRC national visibility award after taking part in the Puerto Rico protest that led to resignation of former Gov. Ricardo Rosello over his leaked anti-gay and misogynistic text messages.

“Some of the residents of the islands wanted to impeach the governor of Puerto Rico,” Martin said. “But the majority said, ‘No. We don’t want to impeach. We want him out, and we want him out now! Not once in 15 days was a drop of blood shed, but we got rid of him.”

With Trump restricting the number of refugees who can be admitted into the United States to a cap of 18,000 a year, Martin dedicated his award to LGBT refugees “leaving their countries because they feel threatened.”

“Congress has a serious job ahead of us,” Schumer said. “We are in rare constitutional waters. You have my word that Speaker Pelosi and I will treat this matter with the gravity and seriousness and dignity and demands.”

Mixing both the political and personal, Schumer talked about his experience with former Rep. Barney Frank, who’s gay, and his daughter, Allison, recalling the time she came out to him before she married.

“At dinner, my daughter Allison told my wife Iris and me that she was gay,” Schumer said. “After dinner Iris asked me, ‘How do you feel?’ I said, ‘Whoa, sort of brand new. Ask me again in the morning.’ You know, sometimes your mind processes things overnight and you wake up and it’s resolved. Well, the next morning, here’s how I felt. I said to myself, ‘She’s the same person love so much the day before, but now I love her even a little more because she carried the knowledge of her sexuality, and carried it with such strength and grace and dignity.”

Leading the audience in a chant in which he asked “What will we do?,” and they responded, “Ditch Mitch,” Schumer pledged to support LGBT people if Democrats win a majority in the Senate.

“As majority leader, one of the first things I will do is put the Equality Act on the floor, and I believe it will pass,” Schumer said.

Ryan Russell, a football player who recently came out as bisexual, also delivered remarks at the dinner on his experience of coming out.

“Visibility is essential in my life,” Russell said. “There won’t be any until there’s a first. I’m lucky that people in my life, the higher power above and the man in the mirror allowed me to be that person.”

“As a trans women of color, we face violence, we face brutality, we face so much,” Jackson said.

Talking about her experience as a transgender woman of Caribbean descent, Jackson said people “talk about love, but we forget about humanity.”

Making quips the audience was “spending money you don’t have” at the dinner, likening that to the expensive shoes she buys herself, Jackson forcefully insisted several times she rejected any offering of tolerance and demands their respect.

Nik Harris, a Florida-based gay activist, told a moving story about being closeted as a young adult, but watching her teenager brother — who is also gay — being sent to conversion therapy.

“I often wonder how different my baby brother’s experience would be if I had the courage to come out first,” Harris said. “If I had tackled some of the difficult conversations so may baby brother didn’t have to. My brother survived, but he still carries the painful scars. Even now, at 33 years old, this successful stylist in Hollywood questions his very existence.”

Hudson Young, a board member of the Human Rights Campaign, urged his audience “particularly those of us who are cisgender and white, to speak out and do more to give more, to be willing to be uncomfortable, and to use our privilege to benefit others.”

Sherie Hughes, another Human Rights Campaign board member, won resounding applause when as she listed intersectional movements, including support for Black Lives Matter, denunciation of anti-Semitism and believing survivors of sexual misconduct.

“We know that there is no success in the movement for the LGBTQIA equality without our voices joining in the demand for fairness and inclusion for all people,” Hughes said.

The dinner paid tribute to Cathy Nelson, senior vice president of the Human Rights Campaign, who is departing the organization after 30 years of service. The Gay’s Mens Chorus of Washington and Grammy-nominated singer Alice Smith performed at the start of the event. Singer Thelma Houston concluded the dinner.

Among those in attendance at the dinner were Pennsylvania State Rep. Brian Sims, founder of Freedom to Mary Evan Wolfson, Dennis and Judy Shepard, Jane Clementi of the Tyler Clementi Foundation, Mara Keisling of the National Center for Transgender Equality, Earl Fowlkes of the Center for Black Equity and National Transgender Visibility March organizer Marissa Miller.