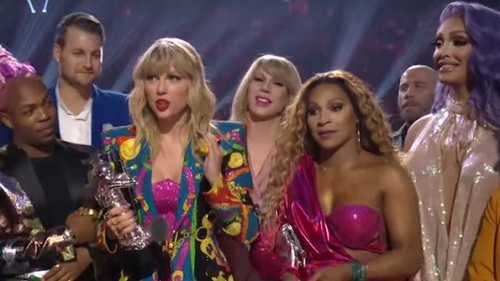 Taylor Swift opened MTV’s 2019 Video Music Awards on Monday with a performance of her pro-LGBTQ anthem “You Need to Calm Down” which ultimately won Video of the Year, the biggest award of the night.

Swift performed the song along with bestie Todrick Hall and a slew of drag performers who also performed with Miley Cyrus during her 2015 VMAs performance of “Dooo It.” Swift later slowed things down with her first live performance of the single “Lover.”

“You Need to Calm Down” won MTV’s Video for Good and Video of the Year. Swift brought up some familiar faces who appeared in the music video including Hall, local drag performer Tatianna and local Beyoncé impersonator Riley Knoxx.

Swift got political during her acceptance speech for Video of the Year urging fans to sign her petition for the Equality Act.

“I first want to say thank you to the fans because in this video, several points were made, so you voting for this video means that you want a world where we’re all treated equally under the law, regardless of who we are, regardless of how we identify,” Swift says.”At the end of this video there was a petition — and there still is a petition — for the Equality Act, which basically just says we all deserve equal rights under the law. I want to thank everyone who signed that petition because it now has half-a-million signatures, which is five times the amount that it would need to warrant a response from the White House.”

Another notable moment of the night included John Travolta who presented Video of the Year alongside Queen Latifah. His time on stage got attention when he mistakenly tried to hand the award to “RuPaul’s Drag Race” star Jade Jolie instead of Swift.

Out rapper Lil Nas X and Billy Ray Cyrus won Song of the Year for their hit single “Old Town Road (Remix).” This was Lil Nas X’s first award for the song.

Missy Elliott also performed a medley of some of her greatest hits before accepting MTV’s Vanguard Award. The rapper entertained the crowd with her songs “The Rain,” “Hot Boyz,” “Get Ur Freak On,” “Work It,” “Pass That Dutch” and “Lose Control.”

Mariah Cooper of the Washington Blade, Courtesy of the National LGBT Media Association