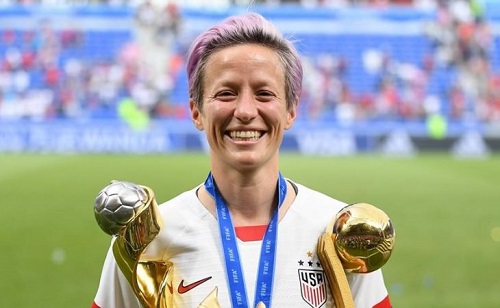 Megan Rapinoe took the time to give her brother Brian Rapinoe a birthday shout out right after leading the U.S. Women’s National Team to its second straight World Cup win.

While giving a post-game interview to Fox News, Rapinoe directly addressed her brother.

“Just one thing: Happy birthday, Brian. I love you so much,” Rapinoe, 34, said in the camera before blowing a kiss.

ESPN reports that Brian, 38, was unable to travel to France to witness the game live because he is currently booked into a San Diego rehabilitative program which allows inmates to serve their final year taking classes outside of prison.

“Megs, breaks my heart that you couldn’t fly me out for an all-expenses-paid trip to France,” Brian reportedly texted his sister ahead of the game.

“Oh yeah, so sad I couldn’t pamper you for a month in France,” Rapinoe jokingly replied.

Rapinoe explained to ESPN that Brian was her and her fraternal sister Rachael’s hero growing up.

Brian started using drugs at age 12 and at age 15 was arrested for bringing meth to school. He’s been incarcerated most of his adult life. He has been sober for 18 months.

“My brother is special. He has so much to offer,” Rapinoe says. “It would be such a shame if he left this world with nothing but prison sentences behind him. To be able to have him out, and to play for him, and to have him healthy, with this different perspective that he has now: This is like the best thing ever.”

Mariah Cooper of the Washington Blade, Courtesy of the National LGBT Media Association