Supreme Court sets Oct. 8 to hear whether workers can be fired for being LGBT

By : CHRIS JOHNSON OF THE WASHINGTON BLADE, COURTESY OF THE NATIONAL LGBT MEDIA ASSOCIATION
Comments: 0 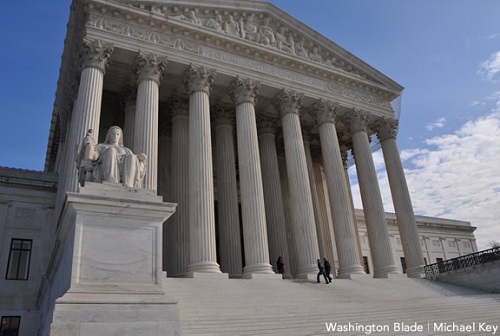 The U.S. Supreme Court has designated Oct. 8 as the date when it will hear arguments on whether Title VII of the Civil Rights Act of 1964 applies to cases of anti-LGBT discrimination, setting up a showdown for when LGBT rights in all areas of life will hang in the balance.

On Monday, the Supreme Court’s website modified the docket entries for each of three Title VII cases to indicate arguments will take place Oct. 8. During the proceedings, justices will consider whether anti-LGBT discrimination in a form of sex discrimination, and thus prohibited under Title VII, which bars discrimination on the sex in the workforce.

Although the litigation on its face are set to determine whether Title VII, which covers workplace discrimination, applies to cases of anti-LGBT discrimination, the ruling will affect all federal laws barring discrimination on the basis of sex, including Title IX of the Education Amendments of 1972 and the Fair Housing Act.

The American Civil Liberties Union is representing the estate of Donald Zarda, which is suing Altitude Express on the basis of the late gay skydiver was terminated from his job for being gay, and Aimee Stephens, a funeral worker who was terminated from Harris Funeral Homes after coming out as transgender.

The ACLU also filed its respondent brief in the case of EEOC v. Harris Funeral Homes to make the argument anti-transgender discrimination is a form of sex discrimination.

In the aftermath of President Trump remaking the court with a conservative majority, many legal observers have privately expressed skepticism justices will reach a conclusion in favor of LGBT rights.

Optimists, however, point to comments made by U.S. Chief Justice John Roberts, the new swing justice on the court, during the Obergefell arguments in 2014. At the time, Roberts speculated bans on same-sex marriage are a form of sex discrimination.

“I mean, if Sue loves Joe and Tom loves Joe, Sue can marry him and Tom can’t,” Roberts said. “And the difference is based upon their different sex. Why isn’t that a straightforward question of sexual discrimination?”

(Roberts ended up being in the minority of the court, which found bans on same-sex marriage are constitutional.)

It remains to be seen whether the Trump administration will participate in oral arguments. Since the time the Supreme Court agreed to hear the cases in April, the U.S. Justice Department has refused to say whether it will submit a friend-of-the-court brief or send the U.S. solicitor general to argue during oral arguments.

It made that case with respect to anti-gay discrimination when the Zarda case was pending before the U.S. Second Circuit Court of Appeals. Similarly, the Justice Department in a friend-of-the-court brief to the Supreme Court asserted the U.S. Sixth Circuit Court of Appeals wrongly concluded Title VII covers anti-trans discrimination in the Harris case.

CHRIS JOHNSON OF THE WASHINGTON BLADE, COURTESY OF THE NATIONAL LGBT MEDIA ASSOCIATION

Opponents in LGBT case agree: It’s not about wedding cake