ABOVE: Donna Summer by Karen Schremmer.

That’s in addition to painting intricate murals, which are found all across Clearwater, St. Petersburg and Tampa, and curating monthly exhibits featuring established and emerging artists at MIZE Gallery. Opened last year, the gallery is bringing art enthusiasts to St. Petersburg’s Historic Uptown neighborhood in droves.

After co-hosting a multi-venue Pride exhibit last year in partnership with fellow fan favorite artist John Gascot, Mize knew he wanted to celebrate his community for Pride Month 2019. Drawing inspiration from the anniversary of Stonewall, he decided to showcase 50 diverse pieces by 50 LGBTQ or ally artists, most of whom call Tampa Bay home. Mize began by researching LGBTQ community icons, hailing from pop culture to politics, and compiling a list of potential portraits. “There were so many,” he says. “I came up with 120.”

He chose a personal hero for his own contribution to the series, the late Keith Haring. The openly LGBTQ artist’s graffiti-like pop art, which drew inspiration from political and personal experiences, grew out of New York City’s street culture in the 1980s.

“I went to his Pop Shop in Manhattan when I was a kid and it inspired me to do what I do,” Mize explains. “He sold T-shirts, small prints, buttons … I was like, ‘I want that someday!’ and I now do that with my art and gallery. Accessible art.”

The curator subsequently found 49 participants to join him in the exhibit. “Doing monthly shows, I have probably 600 artists in my database that I can select from,” Mize says. “I chose certain artists that I knew could do portraits and I wanted to tap into people who did figurative work. This was about community, but it was also about finding those I knew could really deliver—the best of the best.”

That included his partner during last year’s Pride exhibit. “We have a rich LGBTQ artist community in Tampa Bay,” Gascot says. “Whenever there’s an opportunity to band together and shine as a family I take it.”

The artist opted to paint supermodel of the world and drag superstar RuPaul for his portrait. “I chose RuPaul because of his tenacity,” Gascot says of the piece, completed in his trademark “Latin Pop” style.

“He could have easily been a one-hit wonder and faded away back in the 90s, but he had a clear vision and stuck to it,” he continues. “RuPaul is a voice for many—a pioneer in bringing our culture into the mainstream and an inspiration.”

Artist James McCracken painted Cher, an ally he describes as “always progressive and always fierce!” His icon, completed in acrylic, was chosen because he saw her perform on television in the early 70s when he was a child.

“I thought she was remarkably gay,” he recalls. “Later I learned when she was 12 that she met two of her mother’s gay friends and was so taken by them that she decided to emulate them. She was a fierce fighter for women’s rights, played a lesbian in ‘Silkwood’ and has also helped draw attention to the transgender community with her son Chaz Bono.”

Artist and activist Cole Foust chose politician Harvey Milk. “I chose to paint a portrait of Harvey Milk because I feel his spirit is kept alive through my commitment to advocacy and education,” he says. “Harvey Milk was a leader that inspired courage in others. He invited LGBTQ+ people to be open about their identities so the nation would be forced to acknowledge how integral LGBTQ+ people are in our society. 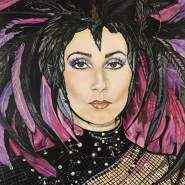 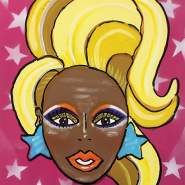 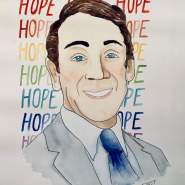 “As a community, we continue the fight for equity and we hope for a better tomorrow,” Foust continues. “In the words of Harvey Milk, ‘Hope will never be silent.’”

The additional portraits rounding out the show are extensive, with subjects spanning the five decades since Stonewall.

Mize gave each artist three months to complete their piece and instructions to begin their work on 12’x16’ wood panels, though mediums varied.

“When I was curating I didn’t want only painters,” he explains. “You want to mix it up and get some people that do different things.” 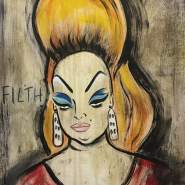 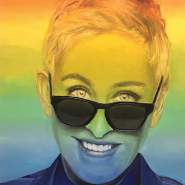 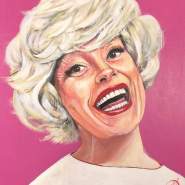 Some worked on paper, subsequently mounting their portraits, while others provided digital files to have printed on the wood. “ICONS” also features photography and even made from LEGOs. To symbolize equality, the pieces were installed side by side and run the gallery’s length. “It’s very visual,” Mize says, “I think it’s powerful.”

Mize says he’s proud of “ICONS” and of his community, adding that curating shows gives him purpose. “I’ve been working for myself since 2001,” he says. “I’m 45. I had a vision of what I wanted to do and St. Pete has been good to me.

“I want to find fresh new talent and help them in their careers,” he continues. “I don’t have any children, so these shows are like my babies. Signifying 50 years since Stonewall, this show has meant a lot.”