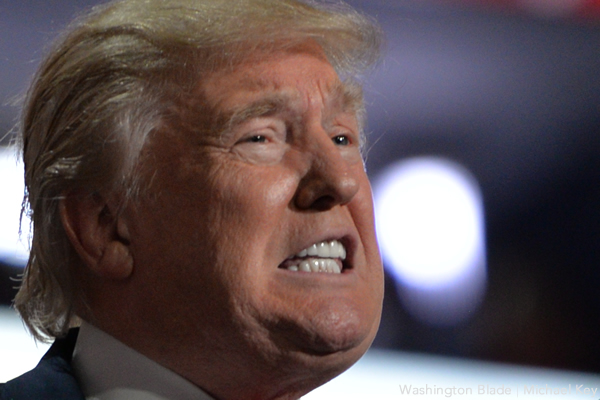 Above: President Trump on May 2, 2019, announced the final version of a “conscience rule” for health care providers that critics contend would allow anti-LGBT discrimination. (Washington Blade photo by Michael Key)

The Trump administration on May 2 announced the final version of a “conscience rule” for health care providers.

The U.S. Department of Health and Human Services Office for Civil Rights in a statement said the rule “protects individuals and health care entities from discrimination on the basis of their exercise of conscience in HHS-funded programs.”

President Trump made the announcement during a National Day of Prayer speech he delivered in the White House Rose Garden.

The Washington Blade previously reported the Trump administration in 2018 proposed the rule after it created the HHS Conscience and Religious Freedom Division.

The rule, among other things, is seen as a way to protect health care providers who refuse to perform abortions because of their religious beliefs. Critics contend the rule will allow them to discriminate against their LGBT patients.

“The Trump-Pence administration just finalized a rule that would allow personal beliefs to dictate patient care,” said the National Center for Lesbian Rights on its Twitter page. “This is a critical threat to our LGBTQ community.”

“The Trump-Pence administration’s latest attack threatens LGBTQ people by permitting medical providers to deny critical care based on personal beliefs,” said Human Rights Campaign Government Affairs Director David Stacy in a statement. “The administration’s decision puts LGBTQ people at greater risk of being denied necessary and appropriate health care solely based on their sexual orientation or gender identity. Everyone deserves access to medically necessary care and should never be turned away because of who they are or who they love.”