National Out to Win Day aims to increase LGBTQ representation 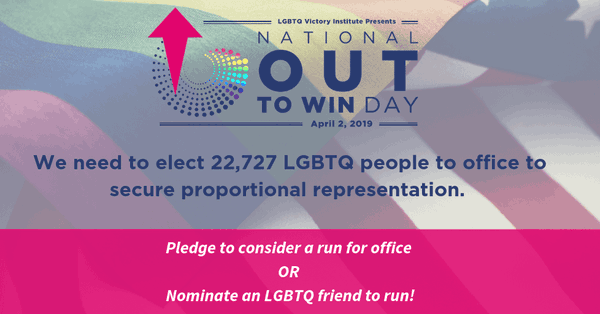 Washington D.C. | The LGBTQ Victory Institute and 18 equality-focused partner organizations are participating in the first National Out to Win Day April 2, aiming to raise awareness about the underrepresentation of LGBTQ people holding elected office.

LGBTQ Victory Institute works to increase the number of LGBTQ people in public office and to provide programming, service, and other support to ensure their success. They advise that currently, LGBTQ people hold just 0.1 percent of elected positions in the U.S. despite being 4.5 percent of the population.

“America needs to elect 22,272 more LGBTQ people to achieve equitable representation,” the organization shared in a press release. “In an effort to increase representation, those who pledge to consider a run or accept the nomination will receive videos of encouragement from LGBTQ elected officials, resources from campaign experts, and other information intended to make running for office more accessible.”

April 2 was chosen as National Out to Win Day because it marks the 45th anniversary of the first time an openly LGBTQ individual was elected to public office in the U.S.  Kathy Kozachenko was elected to the Ann Arbor, Michigan city council on this day in 1974.

“Many barriers to entry exist for LGBTQ people considering a run for office, but among the most significant is that we need to be asked more times than white straight cisgender men before we give it serious consideration,” said Mayor Annise Parker, President & CEO of LGBTQ Victory Institute. “Forty-five years ago, Kathy Kozachenko achieved what many thought impossible, so today we continue her legacy by telling LGBTQ people that they can do it too. We need to be asked more times—and we hope for many LGBTQ people, their first ask comes from a friend or colleague or family member on National Out to Win Day.”

For more information about National Out to Win Day, visit OutToWin.org.