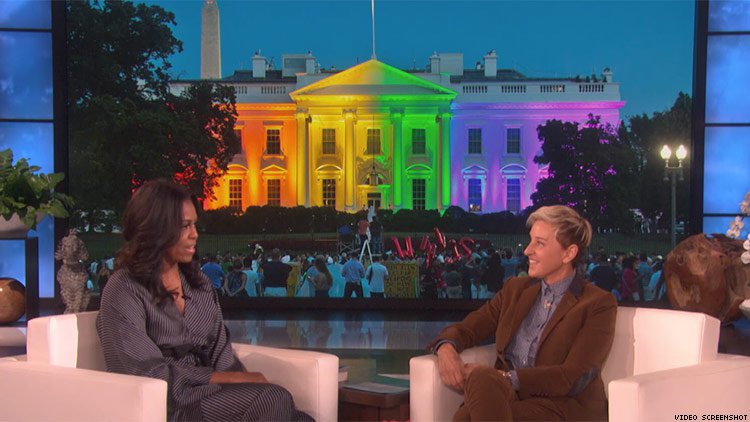 Michelle Obama promoted her new autobiographical memoir “Becoming” on “The Ellen DeGeneres Show” Nov. 15. During the interview, the former first lady recalled a story from her book about the night she tried to escape the White House with her daughter Malia to celebrate the Supreme Court decision to legalize same-sex marriage.

The night of June 26, 2015, the White House was lit with the colors of the LGBTQ Pride flag and people were gathered outside the White House to celebrate, which Mrs. Obama was notified of and tried to take part in.

Obama reveals to DeGeneres that she enlisted Malia, then 16, to join her.

“We were determined and I said, ‘We are not listening to anyone. We are going to walk out that door, you and me,'” she said.

The both of them tried to maneuver through agents, however, soon enough they were caught when they reached a locked door. After understanding what both of them wanted to do, they were able to leave the White House and join the celebration with security surrounding them.

“It was beautiful,” she continued. “We stood along with all the cheering crowd, off to the side, mind you, so no one would see us, with security surrounding us, and we tried to have our tender mother-daughter moment, but we just took it in. I held her tight, and my feeling was, we are moving forward. Change is happening.”

“Becoming” was released in bookstores and online Nov. 13 becoming an instant bellseller, selling 725,000 copies in its first day.

Watch the Obama-DeGeneres interview below.

Ellen DeGeneres among those awarded top US civilian honor