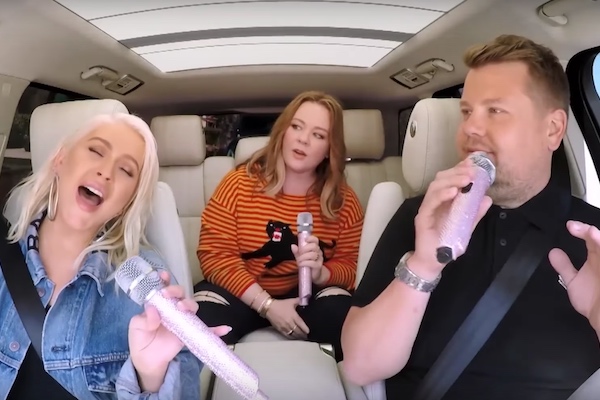 Christina Aguilera joined James Corden for an edition of “Carpool Karaoke” on “The Late, Late Show with James Corden” on Monday.

Aguilera started off demonstrating to Corden how she vocalizes her signature growl while singing “Fighter.”

“How are you doing that with your voice?” Corden asks.

“That’s an angsty thing, you’ve got to get your fighter on,” she explained. Corden tries to copy the sound but says he ends up sounding like Fozzie Bear.

Melissa McCarthy makes an appearance and raps Redman’s intro on Aguilera’s hit song “Dirrty.” The trio then sing her other classic single “Genie in a Bottle.”

Aguilera also shared some secrets from behind the scenes of the “The Mickey Mouse Club” which included Aguilera, Ryan Gosling, Britney Spears and Justin Timberlake as castmembers. Corden asks if she ever “got lost in Ryan Gosling’s eyes” but Aguilera says she “wasn’t on the train.”

“Were you on the Timberlake train?” Corden asks.

“Um, I think, there was like a… me and Britney… well now you know there was a thing back then. It was a good time,” she says.”He had swag. Back then he had swag.”

While she didn’t spill too much on her own crush she revealed Gosling may have had a crush on a certain future pop star.

“But I know Ryan did have a crush on Britney. I think so,” Aguilera says.