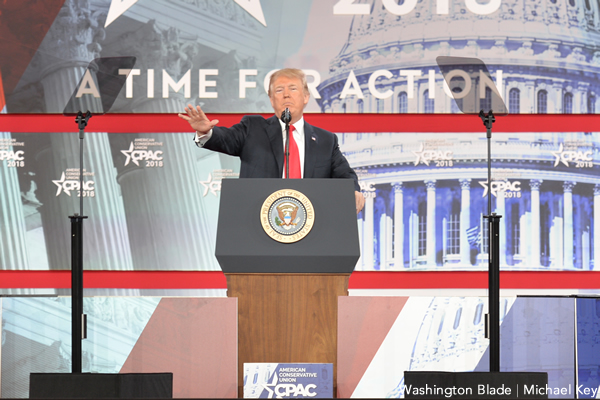 In the memo dated March 23, Trump defers on the transgender military issue to Defense Secretary James Mattis and based on his recommendation asserts transgender people shouldn’t be allowed to serve “except under certain limited circumstances.”

“Among other things, the policies set forth by the secretary of defense state that transgender persons with a history or diagnosis of gender dysphoria — individuals who the policies state may require substantial medical treatment, including medications and surgery — are disqualified from military service except under certain limited circumstances,” Trump writes.

Despite media reports indicating Mattis recommended transgender people say in the armed forces, the recommendation reveals in fact he advised the president that having gender dysphoria, a defining characteristic for transgender people, should be a disqualified factor for military service.

“The Department of Defense concludes that there are substantial risks associated with allowing the accession and retention of individuals with a history or diagnosis of gender dysphoria and require, or have already undertaken, a course of treatment to change their gender,” Mattis writes. “Furthermore, the department also finds that exempting such persons from well-established mental health, physical health, and sex-based standards, which apply to all service members, including transgender service members without gender dysphoria, could undermine readiness, disrupt unit cohesion and impose an unreasonable burden on the military that is not conducive to military effectiveness and lethality.”

Although Trump defers to Mattis on implementing the prohibition on transgender military service, the action is moot because four trial courts and two circuit courts have determined barring transgender people from the military because of their gender identity. Hours before the memo was issued, a Pentagon spokesperson told the Blade the military “will still comply with federal court rulings and continue to assess and retain transgender service members.”

If the ban were to go into effect, however, it would likely set up a ban leaving few exceptions for transgender individuals to remain in service. The criteria in which transgender people could stay isn’t entirely clear, but seems to be restricted to service members who came out when open service was allowed during the Obama years and prior to Trump’s change. The Mattis memo also says transgender people can stay if they “have been stable for 36 consecutive months in their biological sex prior to accession,” don’t have a history of gender dysphoria or don’t require transition-related care — but the definitions of the terms for the exceptions are unclear.

LGBT groups excoriated Trump for the memo upon its release, saying in a conference call it amounts to doubling-down on his tweets from July in which he said he’d ban transgender people from the military “in any capacity.”

“A ban is a ban, no matter how it’s dressed up,” Nardecchia said. “At its core, the policy still discriminates based on an irrelevant characteristic. It still harms our national security and it still runs counter to the military’s own extensive studies.”

David Stacy, director of government affairs for the Human Rights Campaign, said Trump administration officials issued the memo late on a Friday night “because they’re embarrassed by it, and they should be.”

“It’s quite clear this is a complete ban, and Secretary Mattis was backed into a corner by the Commander-in-Chief and ordered to come up with a post-hoc justification for this policy that was based on politics, not any sort of assessment of where the country is, where military readiness is and the ability of transgender individuals openly and honestly in our military,” Stacy said.

Praising the ban, however, was Tony Perkins, president of the anti-LGBT Family Research Council, who said in a statement Trump “is moving the military away from the crippling policies of the Obama era that left our nation’s defenses at its lowest levels of readiness since before WWII.”

“He recognizes that the last thing we should be doing is diverting tax payer dollars from mission-critical training to funding for controversial gender reassignment surgeries and transgender sensitivity training for service members,” Perkins said. “The president is keeping his promises and advancing policies essential to keeping our military strong and our country safe.”

Mattis purports to have come to this recommendation after convening a months-long study that took input from transgender service members and medical professionals, but the conclusions are contrary to mainstream medical views, which don’t consider being transgender a mental illness. In fact, the American Medical Association in 2015 came out against banning transgender people in the armed forces.

Aaron Belkin, director of the San Francisco-based Palm Center, said in a statement the methodology upon which the Pentagon relied is faulty and seeks to justify discrimination.

“Today’s announcement fulfills President Trump’s July 2017 tweet calling for the reinstatement of the transgender military ban,” Belkin said. “In service to the ideological goals of the Trump-Pence base, the Pentagon has distorted the science on transgender health to prop up irrational and legally untenable discrimination that will erode military readiness. There is no evidence to support a policy that bars from military service patriotic Americans who are medically fit and able to deploy. Our troops and our nation deserve better.”

While Trump was criticized for the initial ban because he appeared to devise it without consultation from military leaders, the new policy appears to make up for that by deferring to the judgement of Mattis. That could make things more complicated as litigation proceeds because court generally defer to military leaders on military issues.

Nardecchia, however, said the reliance on Mattis in the new policy doesn’t alter the strategy for LGBT legal groups, nor does she think it will make courts look upon the ban more sympathetically.

LGBT rights advocates had varying assessments on whether Mattis was culpable for the new policy and said the recommendation seemed like it was developed after the fact to justify Trump’s ban.

Matthew Thorn, executive director of the LGBT military group OutServe-SLDN, said the real villain behind the policy is Trump, although Mattis shares some blame.”

“I wouldn’t characterize it as escaping culpability from this,” Thorn said. “He is making a recommendation that is counter-point to major, long studies and feedback that was provided to the Defense Department in 2016, but at the end of the day, this is the president and the president directing this decision.”

Pulse survivors invoke LGBT victims at March For Our Lives

Gun control rallies take place in Florida, across U.S., around the world