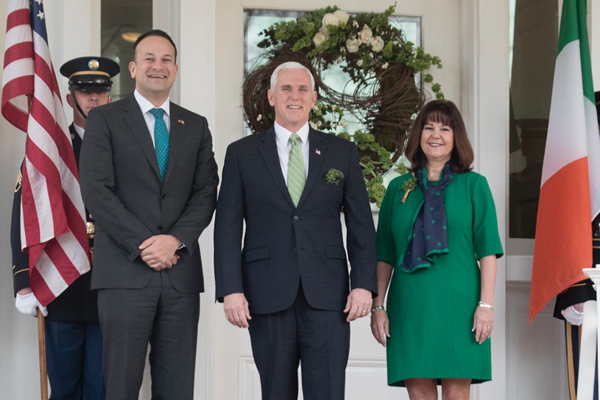 Vice President Mike Pence is taking heat for excluding the media from his breakfast meeting with Irish Prime Minister Leo Varadkar, who is gay.

The breakfast at the Naval Observatory is a tradition for St. Patrick’s Day, which is a time when the Irish leader makes his annual visit to Washington to meet with U.S. leaders. This year, Varadkar was representing Ireland during his first year as prime minister.

But this year was different than previous years: The breakfast was now between an openly gay leader of Ireland and a vice president with a draconian anti-gay record. What’s also different is that in the past reporters were able to attend the breakfast, but this time the exchange was closed to the media.

Prior to the breakfast, Varadkar was quoted in the Ireland publication TheJournal.ie as saying he’d like to raise LGBT issues with the vice president during the breakfast.

“I am going to be meeting him over breakfast on Friday morning, so if I have the opportunity I will certainly be mentioning the wider issue of equal rights and freedoms for LGBT citizens,” Varadkar said.

The nation’s largest LGBT group, the Human Rights Campaign, pounced on the closed-press nature of the breakfast as evidence Pence didn’t want to be seen with a gay person or be held accountable for his anti-LGBT record.

Ahead of his meeting with anti-#LGBTQ Mike Pence, Ireland’s openly gay Prime Minister Leo Varadkar said he wanted to bring up LGBTQ rights at the meeting.

Today, @mike_pence banned the media from covering the event.

We don’t think so. https://t.co/ouJirE7dSL

Pence has an extensive anti-LGBT history. As a U.S. House member, Pence backed a U.S. constitutional amendment that would have banned same-sex marriage; he also opposed hate crimes protections legislation, “Don’t Ask, Don’t Tell” repeal and a version of the Employment Non-Discrimination Act.

Most prominently, Pence in 2015 as Indiana governor signed a “religious freedom” bill allowing businesses and individuals to refuse services and discriminate against LGBT people. After pressure from LGBT advocates and the business community, Pence was forced to sign a “fix” to the law significantly limiting its scope.

Pence has been dogged by comments from his 2000 campaign for the U.S. House stipulating he would support HIV/AIDS funding on the condition that resources are directed to institutions that “provide assistance to those seeking to change their sexual behavior.” That has been interpreted as support for “ex-gay” conversion therapy, although Pence through a spokesperson has denied he ever supported the practice.

The perception Pence backed conversion therapy came to the fore during the Winter Olympics when gay skater Adam Rippon said he wouldn’t meet with Pence because he “funded gay conversion therapy.” A Pence spokesperson asserted the claim was false. Tension grew when USA Today reported Pence sought a meeting with Rippon, but the skater declined it. Pence tweeted out the article was fake and pledged support for Rippon, but the public didn’t buy it based on the vice president’s anti-LGBT history.

Although the breakfast itself within the Naval Observatory was closed to media, reporters were granted access outside for Pence’s invite of Varadkar to the event. According to the U.K.-based Independent, Pence ignored questions shouted at him by reporters and Varadkar didn’t respond to a question about whether he’d bring up same-sex marriage with Pence.

Alyssa Farrah, a Pence spokesperson, affirmed the breakfast itself was closed to the press and said the two leaders already appeared together at events in the White House that were open to the media.

“The vice president and the prime minister met and spoke together at multiple events yesterday,” Farrah said. “Today’s informal breakfast is set up like every breakfast the vice president has had with a foreign leader following their meetings at the White House.”

According to the Irish media, the decision to close the event to press was made by the Pence camp. Farrah denied the breakfast was made closed press at behest of the vice president, but didn’t respond to a follow-up email on who made the decision.

Sources within the vice president’s office said there’s no precedent for open or closed press for this breakfast, even though last year’s breakfast was open press, because it’s only the second time the vice president has participated. (In 2015 and 2016, the breakfasts between then-Vice President Joseph Biden and then-Irish Prime Minister Enda Kenny were open press.)

The vice president’s office made public transcripts of remarks from Pence and Varadkar during the breakfast. Not once during those remarks, according to the transcripts, did either of the leaders articulate views on LGBT rights, despite Varadkar’s pledge to bring it up.

Also made public via the vice president’s Twitter account were photos of Pence and Varadkar together during the breakfast, which were captioned with words from Pence praising the U.S.-Ireland relationship.

Karen & I were honored to welcome Taoiseach Varadkar to our home at the Naval Observatory for an Irish breakfast. #StPatricksDay is the perfect time to celebrate our friendship & to marvel at Ireland’s lasting mark on America and the American people. pic.twitter.com/S9yroBwnf7

Honored to have joined @POTUS as we welcomed Irish Prime Minister Leo Varadkar to the @WhiteHouse today. Productive meetings with him & enjoyed celebrating the strong partnership between the U.S & Ireland at the #FriendsOfIreland Lunch & the annual Shamrock Exchange. pic.twitter.com/kz8MSGsxLd

Tillerson out as secretary of state

Ireland’s likely next PM would be first gay, minority leader