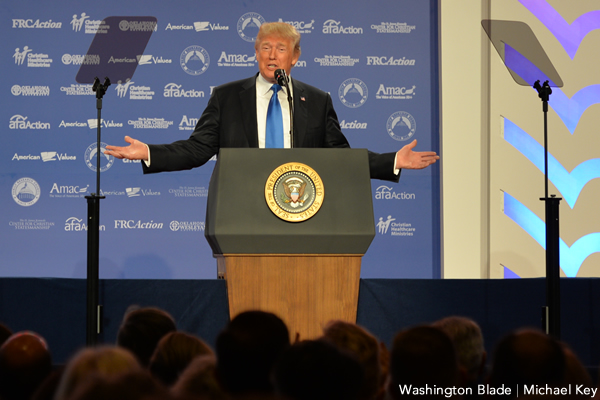 Defense Secretary James Mattis delivered his recommendation to President Trump on transgender military service in compliance with a directive to the Pentagon earlier this year, officials have told the Washington Blade.

Hogan Gidley, a White House spokesperson, confirmed Mattis delivered his recommendation to Trump, but wasn’t forthcoming about the next steps.

“The White House has received the Department of Defense’s recommendations on transgender personnel in the military,” Gidley said. “It is currently under review.”

Maj. David Eastburn, a Pentagon spokesperson, said late Friday the “secretary made his recommendation to the White House this morning.”

The recommendation was due Wednesday in correspondence with a directive Trump issued in August banning transgender military service. Mattis was initially scheduled to meet with Trump on Tuesday for lunch, but that was cancelled due to a scheduling conflict. The recommendation had to wait until Friday.

Officials wouldn’t disclose the nature of Mattis’ recommendation to Trump. According to multiple media reports, Mattis was expected to advise Trump transgender people should be allowed to serve in the U.S. military.

That would stand in contrast with Trump’s directive, which reinstated a ban on transgender service lifted in the Obama years, sought to bar new transgender recruits from serving in the armed forces and prohibited the U.S. military from paying for gender reassignment surgery.

Ashley Broadway-Mack, president of the American Military Partner Association, said in a statement a policy that allows transgender people to serve is the only recommendation that makes sense.

“At the heart of this recommendation is the fundamental question of whether or not any qualified American should be allowed to serve our country, regardless of their gender identity,” Broadway-Mack said. “The qualified transgender Americans proudly serving and enlisting in the military deserve our full support, not Donald Trump’s unfounded and reckless attempt to ban them.”

The next steps in the aftermath of the Mattis recommendation remain to be seen. Defense officials have said Trump would announce a new policy on transgender service after March 23, which would correspond with the date in the August directive when the ban should be fully implemented.

If transgender service members go through transition and can’t be deployable for 12 months, they may face expulsion from the U.S. armed forces under that “deploy-or-out” policy.

Matthew Thorn, executive director of the LGBT military OutServe-SLDN, denied the “deploy-or-out” policy will be an impediment for transgender service members.

“Trans service members are currently deploying and are able to meet the standards set forth,” Thorn said. “Further, there are waivers available for commanders and units should any service member come close to the timeline set forth in the deployability memo. So long as the standards are equitable across the board we expect this to be a non issue.”

Regardless of Mattis’ recommendation to Trump or any new policy on transgender service he may implement, multiple courts have enjoined the U.S. military from enforcing Trump’s ban as a result of litigation filed by LGBT legal groups.

That means transgender people will be able to serve in the U.S. military without fear of discharge over their gender identity and obtain transition-related care, including gender reassignment surgery, even if Trump attempts to modify his policy with a kind of “Trans Ban 2.0.”

Mara Keisling, executive director of the National Center for Transgender Equality, said in a statement “thousands of trained and capable transgender troops have been serving ably and openly for nearly two years without issue.”

“It’s no wonder the secretary doesn’t want to cause needless chaos for the military and discard valuable personnel with critical skills just because of who they are,” Keisling said. “And of course, as we have heard military leaders and lawmakers of both parties say so many times, any American who can meet the military’s tough standards and is willing to risk their life should be able to join up and serve.”

The Last Page with Founder and Guiding Light Tom Dyer

Who’s to blame for trans military ban: Mattis or Pence?

No recommendation from Mattis yet on trans military service