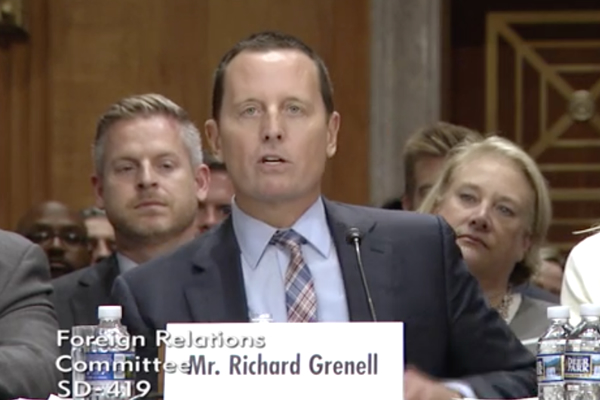 ABOVE: Richard Grenell is facing opposition in his confirmation process from Democrats. Screen capture public domain.

Log Cabin Republicans officials are assailing Democrats for blocking the confirmation of Richard Grenell as U.S. ambassador to Germany.

The Grenell nomination, President Trump’s most high-profile openly gay appointment, is being held up purportedly over comments Grenell made years ago on Twitter about the appearance of women, including Hillary Clinton, Madeleine Albright, Callista Gingrich and Rachel Maddow.

The Log Cabin missive, dated Jan. 29, attributes the hold up over Grenell to “Democratic dithering,” asserting actions from the Senate minority are holding up an important nomination and the historic confirmation of an out gay ambassador.

“In earlier times confirmations such as Mr. Grenell’s were perfunctory, made swiftly with deference to our nation’s commander-in-chief in a way that transcended partisanship,” the letter says. “Sadly, time and time again over the course of the past year, Democratic senators have abused procedural courtesy to prevent votes by simple acclamation.”

First nominated by Trump in September, Grenell founded the international consulting firm Capitol Media Partners in 2010 and served in various roles as a public communications adviser and a Fox News commentator. Under the George W. Bush administration, Grenell was the longest serving U.S. spokesperson at the United Nations and served four U.S. ambassadors.

For a period of less than two weeks, Grenell served during the 2012 presidential campaign as a foreign policy spokesperson for Republican nominee Mitt Romney, but resigned amid pressure from social conservatives over his sexual orientation. Grenell never had the opportunity to speak publicly in the role.

But Grenell is perhaps best known on Twitter for his combative relationship with reporters, including those from the Washington Blade. Taking a cue from Trump, who has declared war on the media, Grenell often accuses reporters of harboring biases that undermine their reporting.

The dispute over Grenell’s confirmation is purportedly over mean tweets the nominee made and unfolds in the context of the #MeToo movement in which women are coming forward with allegations of sexual misconduct.

One 2011 tweet directed at Maddow, a lesbian news anchor on MSNBC, said she “needs to take a breath and put on a necklace” and another compared her look to that of pop singer Justin Bieber. One tweet directed at Gingrich questioned whether she “snaps on” her hair. At around the same time, Grenell tweeted “Hillary is starting to look like Madeleine Albright.”

(Those tweets echo comments he reportedly made in 1992 as a young aide for the re-election campaign of George H.W. Bush, according to a Washington Post article in 1995. A fellow staffer recalled Grenell telling a female aide wearing a red shoes flowery dress, ‘Didn’t your mother ever tell you only whores and very small children wear red shoes?‘”)

Although Grenell deleted the tweets and apologized for them, they continued to haunt him through his confirmation hearing, where he again apologized.

“Anybody who knows me knows that I am a very caring person and very sensitive — and I also appreciate good humor,” Grenell said. “Unfortunately, there are times where what was intended to be humorous turned out to be not so humorous, and, again, that was never my intention and I regret that.”

Senate Majority Leader Mitch McConnell (R-Ky.) could force a vote on the nomination, but it’s unclear if the votes are present to confirm Grenell.

Stephanie Penn, a McConnell spokesperson, said “there are still Democrat objections, but we don’t yet have a scheduling announcement.”

Although the Senate no longer requires 60 votes to break a filibuster on presidential nominees, any individual senator can still refuse to give unanimous consent. That means it will require 30 hours of debate to move forward.

Chris Harris, a Murphy spokesperson, denied the senator has blocked unanimous consent on Grenell and said Murphy is deferring to Senate leadership on bringing the nomination to the floor.

“Such a request has not yet been made this year by the way,” Harris said. “And just for your information, the same was true when leadership’s request eventually went around in December.”

The absence of a U.S. ambassador to Germany may complicate U.S. foreign policy. When Trump visited the World Economic Forum in Davos, David Martosko, political director for the U.S. Daily Mail, commented on Twitter with the position vacant “the U.S. had no German ambassador there to follow up with the appropriate CEOs.”

Besides the signatories of the Log Cabin letter, others have expressed support for the confirmation of Grenell. Among them is the Obama administration’s U.S. ambassador to Russia Michael McFaul and “Ellen” show executive producer Andy Lassner.

But other LGBT groups have remained silent. The Human Rights Campaign and the Gay & Lesbian Victory Institute haven’t come out in favor of the Grenell nomination and didn’t respond to a request to comment for this article.

There are few out LGBT appointees in the Trump administration. Two were confirmed unanimously in the Senate: James Abbott, who was confirmed to the Federal Labor Relations Authority; and David Glawe, under secretary for intelligence and analysis at the Department of Homeland Security.

Claudia Slacik, was nominated, but not yet confirmed, to the board of the U.S. Export-Import Bank. Trump also re-nominated lesbian Democrat Chai Feldblum to the U.S. Equal Employment Opportunity Commission, which by law requires appointments of different parties.

The office of Senate Minority Leader Charles Schumer (D-N.Y.), to whom the missive is addressed, didn’t respond to the Washington Blade’s request for comment.

These two anti-LGBT Republicans may run for Senate in 2018