Dems seen as caving after agreeing to end gov’t shutdown

By : Chris Johnson OF THE WASHINGTON BLADE, COURTESY OF THE NATIONAL LGBT MEDIA ASSOCIATION
Comments: 1 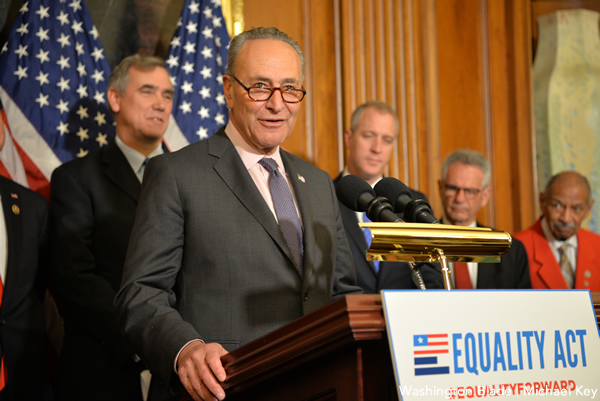 Democrats are widely viewed as having caved on their pledge to fight for young, undocumented immigrants to remain in the country, after agreeing to end a U.S. government shutdown shortly after supporting it.

Although LGBT groups blamed President Trump for the impasse over DREAMers at the start of the government shutdown, those same organizations made veiled assertions Democrats refused to stick to their guns after the vote getting the government up and running.

Tyrone Hanley, policy counsel for the National Center for Lesbian Rights, said the Senate vote to restore government funding for three weeks was disappointing to supporters of recipients of the Deferred Action for Childhood Arrivals program.

“We are dismayed and deeply concerned by the failure to secure a firm commitment on DACA, which should not be held hostage to partisan politics,” Hanley said. “We urge everyone who cares about this country to let your congressional representatives know that their failure to take action and secure a firm commitment on DACA is wreaking havoc in the lives of real people. We need leaders with the moral courage to act and to stand up to this administration’s attacks on vulnerable minorities.”

David Stacy, government affairs director for the Human Rights Campaign, faulted both Trump and “congressional leaders” in a statement following the vote.

“We have a short amount of time to ensure our elected leaders protect vulnerable Americans, including kids who need health care, seniors, troops and hundreds of thousands of Dreamers, including 75,000 LGBTQ young people,” Stacy said. “The Trump-Pence Administration and congressional leaders have once again kicked the can down the road and failed to act in a timely fashion. They must act to ensure these vulnerable communities are not put at further risk.”

Members of the Senate Democratic minority agreed to vote for a continuing resolution to reopen the federal government after they were lockstep in supporting a shutdown. They demanded reauthorization of the Children’s Health Insurance Program, or CHIP, and a solution to allow recipients of DACA, an Obama-era program Trump ended, to remain in the United States.

The measure the Senate voted on Friday, approved by the U.S. House the previous day, conceded to the demand to reauthorize CHIP, but took no action on DACA. The Senate Democratic caucus was virtually united in voting it down.

After nearly four days of Democrats and Republicans playing the blame game for the shutdown, Democrats agreed to vote for essentially the same bill. But the measure, approved by a vote of 81-18, only continues government funds for three weeks until Feb. 8. Senate Majority Leader Mitch McConnell (R-Ky.) also agreed to bring to the floor by that time legislation to address the DACA issue.

Sen. Tammy Baldwin (D-Wis.), the only out lesbian in Congress, voted for the shutdown Friday and reversed her vote after the weekend.

“Enough with round after round of fighting,” Baldwin said in a statement. “We now have an opportunity in the Senate to do right by the American people so we need to get to work and do it. I will continue my bipartisan work to fully fund community health centers, children’s health care and provide our local communities with the support they need to combat the opioid epidemic and save lives.”

Baldwin called for a funding bill that would last for the remainder of the fiscal year as opposed to a series of stopgap measures.

“We have a bipartisan solution in the Senate that strengthens border security and protects Dreamers who have only known America as their home and are working hard, going to school and serving in our military,” Baldwin said. “Let’s get it done.”

Sen. Kamala Harris (D-Calif.), however, voted for the shutdown Friday and refused to vote to reopen it without a solution for DREAMers.

“The majority leader’s comments last night fell far short of the ironclad guarantee I needed to support a stopgap spending bill,” Harris said in a statement. “I refuse to put the lives of nearly 700,000 young people in the hands of someone who has repeatedly gone back on his word. I will do everything in my power to continue to protect Dreamers from deportation.”

Democrats appear to have lost their leverage by agreeing that a DACA solution doesn’t have to be part of ongoing funds for the government. Even if McConnell keeps his word and the Senate approves such a measure, there’s little prospect of such a standalone measure coming up in the Republican-controlled House.

Trump gloated in victory after the Senate voted to reopen the government, disparaging the Democrats for their actions.

“I am pleased that Democrats in Congress have come to their senses and are now willing to fund our great military, border patrol, first responders, and insurance for vulnerable children,” Trump said. “As I have always said, once the government is funded, my administration will work toward solving the problem of very unfair illegal immigration. We will make a long-term deal on immigration if, and only if, it is good for our country.”

According to the Daily Beast, Trump had no talks with Senate Minority Leader Chuck Schumer (D-N.Y.) on the day the U.S. government was reopened, but did speak with Sens. Doug Jones (D-Ala.) and Joe Manchin (D-W.Va.), who were among the Democrats who opposed the shutdown.

“Look, what the president did clearly worked,” Sanders said. “The vote just came in 81-18. I would say that those numbers are much more in the president’s favor than in Sen. Schumer’s favor. I’m not sure what changed for him and what he gained, other than maybe Nancy Pelosi taking a bunch of Republican members out for dinner to celebrate their shutdown. I’m not sure what other positive things came out of this weekend for Democrats.”