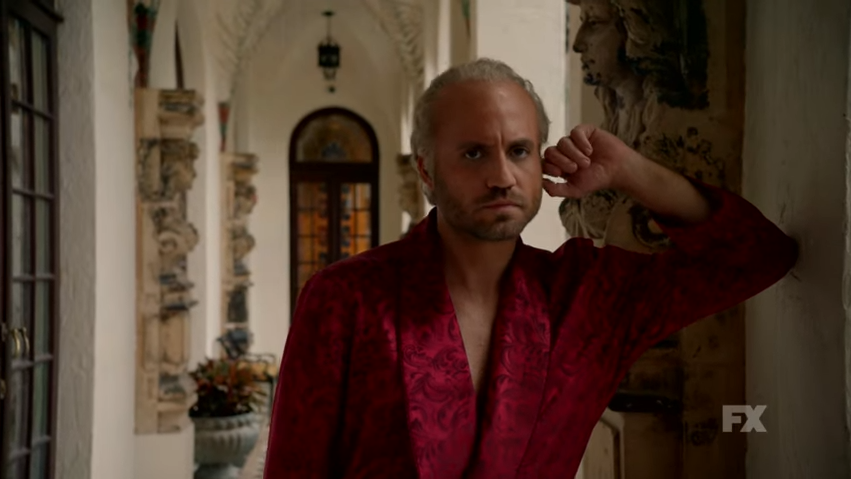 PASADENA, Calif. (AP) — Do the intersecting lives of a fashion designer and the serial killer who murdered him add up to a political saga?

“It was a political murder,” Murphy said, defending the striking use of “assassination” in the title of the 10-episode series that begins airing at 10 p.m. Eastern on Wednesday. The 1997 shooting by Andrew Cunanan of the groundbreaking Italian designer is enveloped in social issues that resonate today, Murphy and series stars Edgar Ramirez and Ricky Martin said.

Cunanan (“Glee” star Darren Criss) was a “person who targeted people specifically to shame them and to out them, and to have a form of payback for a life that he felt he could not live,” Murphy said during a Q&A with reporters.

Ramirez, who plays the adult Versace, and Martin, who portrays his longtime partner, Antonio D’Amico, concurred in separate interviews with Murphy’s assessment.

Versace, who was 50 and reaching new heights of success when he was gunned down in front of his lavish Miami Beach estate, died because of prejudice, said Ramirez (who, with weight added and hair dyed and thinned for “Versace,” is unrecognizable as the actor who appeared in “Zero Dark Thirty” and “Carlos”).

Although Cunanan was on the FBI’s most-wanted list and circulated openly in Miami Beach before Versace became his final victim in a cross-country rampage, he wasn’t stopped because of his gay connections, Ramirez said. Cunanan, 27, fatally shot himself about a week after Versace’s murder.

“The underlying subject is homophobia and how homophobia killed him,” Ramirez said. “That’s something that comes up over and over when we look into the investigation. … Cunanan was on the news every night, on the most-wanted list, and for some reason all the law-enforcement authorities couldn’t get him.”

The California-born Cunanan, portrayed as a deeply disturbed con man, had cultivated relationships with wealthy older men and reportedly had been lovers or friends with two of the five men whose deaths are blamed on him. The other victims included a wealthy Chicago developer and a New Jersey cemetery caretaker.

Illuminating anti-gay bias is important because the LGBTQ community still must fight it, Martin said. As a member of the community, the pop star-actor said, he feels compelled to use his fame to combat hate and discrimination.

“If I don’t use the power that that music gives or, in this case, a character like this gives me, I’d be allowing the crime to happen,” Martin said. His friendships with Ramirez and Penelope Cruz, who plays Donatella Versace, were other inducements to join the series, as was its depiction of the Versace-D’Amico relationship.

Their attachment was illuminated in a conversation Martin had with D’Amico, who in the show’s opening scene is shown discovering Versace’s body immediately after the shooting.

“Ricky, my love for Gianni, our love, was open,”‘ Martin quoted D’Amico as saying. “And I’ve lost him and I’ve never been the same.”

The series unfolds back in time from the murder, finally detailing the journeys of Versace and Cunanan from humble roots to, respectively, fame and infamy.

In a pivotal scene, Donatella confronts her brother about his intention to come out in the late 1980s. She argues the nearly unprecedented move could wreck their business empire, one built on Versace’s talent for combining the glamour of couture with the sexiness and excitement of celebrity. Versace stands his ground, backed by D’Amico.

Based on the book “Vulgar Favors: Andrew Cunanan, Gianni Versace, and the Largest Failed Manhunt in U.S. History” by journalist Maureen Orth, the drama has drawn fire from Versace’s family. In a statement, it was dismissed as “a work of fiction” because family members didn’t authorize the book or participate in the screenplay.

The series’ producers and the publisher of the 1999 book defended it. Orth’s book is “a carefully reported and extensively sourced work of investigative journalism,” Random House said in a statement, and FX Networks and Fox 21 Television Studios said they stand by Orth’s “meticulous” reporting.

While details of private conversations were unavailable for the dramatization, as with the O.J. Simpson series, the “Versace” screenplays by Tom Rob Smith are “very emotional and accurate at the same time,” Murphy said.

A scene with one victim, who’s portrayed as begging for his life before Cunanan kills him, is based on the body’s injuries, Smith said.

“What was that conversation like? So you have these tiny points of truth, and you then try to connect the tissue between it. But I would never use the word `embellishing’ or `making up”‘ It’s trying to join those pinpoints,” Smith said.

Watch the trailer below.