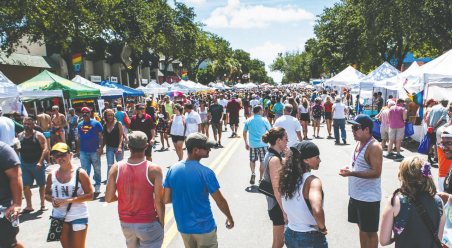 Of the six-person vote, which was held Jan. 9, five voted in favor of holding the event in the Grand Central District, while one meeting attendee abstained. It was held just four days after interim Executive Director Luke Blankenship gathered with the GCDA in the name of “dialogue and transparency,” he says.

Last year, the two organizations found themselves at odds after 2017’s successful but controversial Pride event. For the first time in its 15-year history, the St. Pete Pride parade moved from the Grand Central District to downtown St. Petersburg. Initially, the event’s street festival was to make the move as well, but to ensure it received city funding, it remained in Grand Central in a compromise reached with Mayor Rick Kriseman and the City Council.

In the Jan. 5 meeting, Blankenship advises he outlined the talking points for the potential move, now voted down. “The majority of the conversation was an estimated cost analysis of having the festival in Grand Central and downtown,” Blankenship says.

According to documentation obtained by Watermark, attendees were presented with two pages of information labeled “North Straub & Bayshore v. Grand Central.” It provided the cost analysis of holding the festival in Grand Central, as well as having it follow the parade’s lead and transition downtown. It further noted that St. Pete Pride would save an estimated $6,700 by moving.

The document listed the positives associated with holding the festival at each respective location. For Bayshore, it would be “right on the parade route,” feature “cheaper police fees” and there would be “less logistics” on the day of the festival.

For Grand Central, it’s been held there “since the beginning,” there would be “no potential media/public backlash” and the organization would “keep 10K in city funding.”

“Some members of the GCDA board took this as we were moving the festival downtown because it is cheaper to do the festival downtown vs. Grand Central,” Blankenship tells Watermark. “There were members of their board that took this as the decision already being made because of the cost discrepancy, but there are other factors involved in the decision.”

Those factors, Blankenship says, are most prominently “the logistics of the festival, security measures and where we can make the biggest impact on the LGBTQ+ community as a whole. The latter topics were not discussed at the meeting.”

The GCDA also invited former board member and Punky’s owner Brian Longstreth, described by Tallon as one of the godfathers of the organization and of the St. Pete Pride parade.

Tallon asserts that attendees walked away with a fervent resolve, believing that although the parade was moved in 2017, “the Grand Central District will continue to be the home, host and heart for the Bay Area’s LGTBQ community.”

“Last year, [with] the possibility that the parade was moving to an already event-heavy area in downtown St Pete, I was concerned about the economic effect on the locally-owned and community-focused businesses in the district,” Tallon recalls. “When I saw, heard and felt the emotions from the LGTBQ community and our neighborhoods in Kenwood and Palmetto Park regarding the relocation, it became a much more profound and deeper issue than simply dollars in cash boxes.”

Following the meeting, Longstreth also addressed his concerns via Facebook, noting that Blankenship meant well and that he appreciated the offer to talk. “The last few years, Luke has worked very hard for St. Pete Pride,” he says.

“Last year, Mr. Longstreth pointed out to me that the LGTBQ businesses, their owners, their allies, friends and neighbors are here in Grand Central District, Kenwood and Palmetto 365 days [a year],” Tallon says, “and not for two days in June.”

“That is woven in the fabric of Grand Central,” he notes. “The Rainbow flag will continue flying in the district in perpetuity.”

Blankenship, and the St. Pete Pride board, seem to agree. “Grand Central is where we originated,” Pride’s interim Executive Director says. “…we will never forget this part of the community and will continue to foster a relationship along each step of the process.”

Richardson raises more than $1 million in his run for Congress, earns national endorsement

St. Pete Pride is spreading its wings, so here are sparkling details of all the big events for the weekend

As St. Pete Pride celebrates its 15th Anniversary, we look back on how it all got started