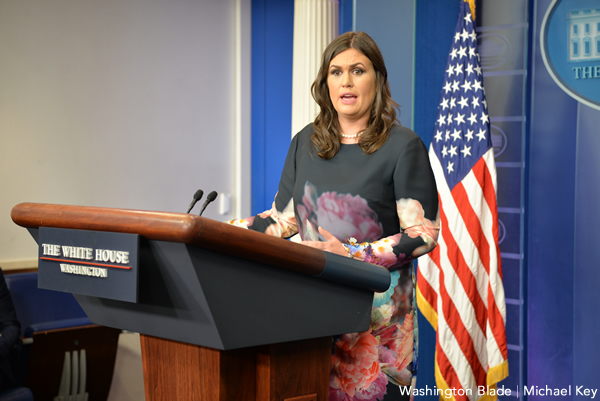 Weeks after the Trump administration fired all remaining members of the President’s Advisory Council for HIV/AIDS, the administration seems to be taking steps to refill those slots, but the ultimate fate of the body remains unclear.

In response to a question from the Washington Blade, White House Press Secretary Sarah Huckabee Sanders was non-committal when asked whether President Trump wants PACHA restaffed.

“We’re looking at the different options, and we’ll keep you posted if we have an announcement on that front,” Sanders said.

Miguel Gomez, spokesperson for the Office of HIV/AIDS & Infective Disease Policy at the Department of Health & Human Services, said “submissions are currently being reviewed” from applicants seeking to join PACHA.

When the Trump administration terminated members of PACHA late last month, it gave them until Jan. 2 to reapply or for potentially new members to submit applications.

President Clinton created PACHA in 1995 and since that time it has provided advice on policy and research to promote effective treatment and prevention for HIV. An estimated 1.2 million people have HIV/AIDS in the United States and 37 million have the disease worldwide.

For the time being, PACHA technically exists, although the body has no members in the wake of Trump’s terminations and earlier resignations that came last year.

Jim Driscoll, a gay Nevada-based HIV/AIDS activist and Trump supporter, said the new members may be announced this month, but that’s only speculation.

“I expect that the new people will be people who support and want to work with this administration,” Driscoll said. “I hope that LGBT people and African Americans will be represented in numbers appropriate to the disproportionate impact of HIV/AIDS on our communities, and that all those appointed will be people who understand the needs of our two communities.”

News over the holidays that Trump had fired all members of PACHA via a letter from FedEx ignited a firestorm. The administration offered no explanation for termination of the members, many of whom had time left on their terms, but gave them the opportunity to reapply.

The move happened amid discontent over the widespread perception of inaction by the administration on HIV/AIDS. Nearly one year into the administration, the White House has yet to appoint a director of the Office of National AIDS Policy.

Trump’s fiscal year 2018 budget proposal also sought massive cuts to HIV/AIDS programs, including $150 million on HIV/AIDS programs at the Centers for Disease Control and more than $1 billion in cuts from global programs like the PEPFAR Global Fund to Fight AIDS, Tuberculosis & Malaria. The Republican-controlled Congress has thus far continued to fund these programs at previous levels.

In June, six members of PACHA resigned their positions in protest over what they called inaction from Trump on the HIV/AIDS epidemic. In a letter written by Scott Schoettes, HIV Project Director at Lambda Legal and one of the six members who resigned, the departing members declared, “Trump doesn’t care about HIV. We’re outta here.”

Trump has made public statements on HIV/AIDS consisting of proclamations on National HIV Testing Day and World AIDS Day. Neither statement, however, included an explicit mention of LGBT people, who have faced the brunt of the disease.

Carl Schmid, deputy executive director of the AIDS Institute, emphasized the importance of Trump refilling the vacant posts on PACHA to give voice to HIV/AIDS issues.

“It is important to have voices and views from outside the government and from on the ground, particularly those who are living with HIV, to offer advice to the HHS secretary on HIV policies and programs,” Schmid said. “PACHA also plays a key role in keeping federal agencies accountable to ensure they are doing the best possible job with taxpayers’ dollars in efforts to end AIDS.”

The administration has also engaged in activity suggesting a continued interest in PACHA. In September, Trump signed an executive order that renewed PACHA along with 31 other presidential bodies.

The Blade reported in October gay Republicans familiar with HIV/AIDS and LGBT issues have been among those contacted by the Trump administration for possible appointments to PACHA.

Schoettes, however, told the Blade he “regret[s] to say” he doesn’t think replacement of PACHA members is particularly important under the Trump administration.

“It would be important if the administration was going to appoint truly qualified individuals and actually planned to take their advice, but I think they have little appetite to do either,” Schoettes said.

Schoettes pointed to a recent report in the Washington Post that the Centers for Disease Control under the Trump administration has banned officials from using seven words — including “fetus,” “transgender,” and “evidence-based” — in budget documents. The CDC has denied those words are banned, but the report continued to alarm LGBT health experts.

“An administration that doesn’t want to work with people who use the words ‘transgender’ and ‘diversity’ and ‘vulnerable’ or even ‘evidence-based’ or ‘science-based’ is not serious about addressing the HIV/AIDS epidemic that exists in the United States today,” Schoettes said. “I left the PACHA because I recognized this back in June, and the actions of the Trump administration since that time — including repeated efforts to undermine the Affordable Care Act —have only confirmed my decision.”

Trump fires all members of HIV/AIDS council without explanation