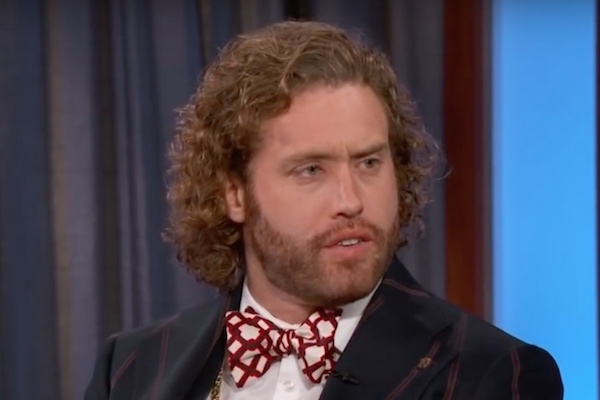 Solzman, who is transgender, told the Huffington Post that she became friends with Miller in 2010. They grew close and Solzman came out to him as transgender in November 2015. At the time, Solzman says Miller was supportive.

Solzman says she saw a transphobic joke on Miller’s personal website and emailed him to say, “It’s very offensive.”

Miller replied to the email addressing Solzman as “Daniel,” a “tranny,” a fu*king asshole” and a “weird strange terrible man.”

“You have merely confirmed what I always knew,” the email reads. “This pursuit of transgender identity is nothing more than an opportunity for you to distinguish yourself as someone who is special, but what is really special is how retarded it is that you would ever think to attack me or say that I’ve been offensive.”

“If you bothered to look into anything that I’ve ever done you would find in not only have I had sex with transgender people, but I have donated widely to organizations that support their freedom,” Miller continues.

“I honestly don’t know what changed,” Solzman told the Huffington Post. However, she credits Miller starring in “The Emoji Movie” as a possible factor for his change in behavior.

Miller is also facing sexual misconduct allegations from two women. One woman, a former college classmate from his alma mater George Washington University, accuses Miller of sexually assaulting and punching her when they were dating in 2001. Adult-film star Dana DeArmond also accused Miller of harassing her on the set of the Comedy Central series “Mash Up” in 2012.

Both he and his wife Kate Gorney have denied the accusations.

Solzman released the letter in September but fearing legal action did not disclose who sent it. In the wake of the allegations, Solzman came forward.

I got this email in early August. I stayed quiet and while it’s redacted, I’m too scared to name them for fear of legal threats against me. pic.twitter.com/J2kA5t1vW7

Miller’s rep told the Huffington Post that Miller isn’t transphobic but was “admittedly going through some things.”

“This is not about him not liking transgender people,” the rep says. “It’s about a specific issue he has with this person. Earlier that day he mentioned how much he supports that person.”

Aaron Carter is ready to embrace his bisexuality