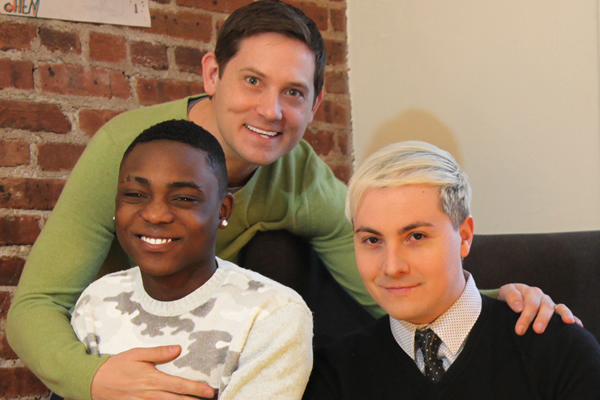 A newly launched super PAC is seeking to make gains for Democrats in state legislatures, and the operation is run by an openly gay former Barack Obama campaign official who helped propel him to victory in 2008.

Forward Majority, which launched in September, has deployed $1 million to win seats next month in the Virginia election with the bold ambition of Democrats taking control of the General Assembly. Those efforts will be used as a prototype for state legislative wins in the midterm and 2020 elections, which will be key at that time because congressional redistricting will be underway and state legislatures have a significant voice in that process.

David Cohen, who’s gay and executive director of Forward Majority, said in an interview with the Washington Blade on Monday that ensuring state legislative wins for Democrats is crucial because they’re “really the frontline of policy” on many issues.

“First and foremost is ensuring that we have a progressive majority that can tackle important issues, but that also can ensure that we should have some level of protection, particularly as the federal government is, in some respects, starts to fail in that regard,” Cohen said. “There’s plenty of ways where we can actually push back on federal policy, and that we’ve seen already in terms of climate, where states are starting to band together to do what they can as a coalition, and I think we’ll continue to see that.”

As Cohen pointed out, the influence of the states is particularly heavy in terms of LGBT rights. Just this year alone, states took a variety of paths on the issue. Many states enacted measures banning widely discredited “ex-gay” therapy for youth, other undermined LGBT adoption rights with “religious freedom” measure, and in Texas, the state legislature went into special sessions to consider, but ultimately fail to pass, an anti-transgender bathroom bill.

“I think that this is an area in particular where states have led,” Cohen said. “And so, we saw that through the marriage fights, and, I think, we’ll probably see it in workplace protections, and then potentially in terms of pushing back on some of the most egregious things in recent years coming from places like Mississippi. So, I think there’s like two sides of that coin.”

Collaborating with Forward Majority is the National Democratic Redistricting Committee led by former Attorney General Eric Holder. The two groups complement each other: The National Democratic Redistricting Committee seeks to end gerrymandering of congressional districts in favor of Republicans, while Forward Majority seeks to ensure Democratic control state legislatures, which in many cases are responsible for shaping congressional districts.

The first order of business for Forward Majority is wins for Democratic candidates in the Virginia state legislature, which will hold elections next month. According to overview documents for the super PAC, Virginia may have to be a “two-cycle flip,” with additional efforts needed for Democratic wins in 2019.

Cohen said efforts in Virginia consist of its own operations — and working with other groups like organized labor and NARAL — as well new groups that emerged after the 2016 election.

“We’re really focused on testing out new technologies, testing out our methodology and making sure that we are able to scale up in smart, efficient ways for next year,” Cohen said.

Around 15 races are the focus of Forward Majority’s efforts in Virginia, which Cohen said would serve as the prototype for other races in 2018.

“One of the great things about Virginia for a prototype is that we’re able to talk with the state party and the coordinated side,” Cohen said. “It’s not really an independent expenditure in same sense because you can talk and coordinate much more so than you’re able to in other states.”

One race important to the LGBT community in Virginia is transgender journalist Danica Roem’s bid to unseat anti-LGBT Del. Bob Marshall (R-Prince William) in the state’s 13th district. If she wins, Roem will have defeated an notoriously anti-LGBT lawmaker and could be the first openly trans person elected and seated to a state legislature in the United States.

But Cohen said that race is “probably not going to be one of the ones that will be focused on” because Forward Majority is looking to engage as “outside muscle” in races where no one else is playing that role.

“Danica Roem is one of the top targeted races, and so, it’s most likely not on our radar,” Cohen said. “There’s some programs we’ll be doing more generically across multiple districts. And so, that may fall into one of those buckets, but it’s most likely not one where we would naturally focus because our mission is always to expand the field.”

As for 2018, Cohen said plans are less concrete. Although Forward Majority has explored different states and potential budget grants, the super PAC hasn’t come to a conclusion about exactly where to play.

“New Hampshire is relatively cheap, Ohio is relatively expensive and we’ve got to figure out what partners we have that want to support that work and make sure that we make a real run at winning a majority in a given chamber,” Cohen said. “How that works breaks out, I think, is more modular for us, and still pretty dynamic at this point.”

Also serving on the board of advisers is Brian Ellner, executive vice president for public affairs at Edelman GM for Public Affairs at the New York-based communications marketing firm Edelman. Ellner was a lead strategist in the effort to win marriage equality in New York State in 2011 and contributed to fundraising efforts for battles at the ballot on same-sex marriage in 2012.

No stranger to political campaigns, Cohen said after graduating from Brown University and teaching 8th and 10th grade, he went into politics in 2003 during the Bush administration as the Iraq War deteriorated, helping Democrats in state like South Dakota and Nevada. In 2008, Cohen was state director for the Obama campaign through the Nevada primary, then managed the campaign’s national mail program.

While working on the Obama campaign in Nevada, Cohen met his partner, Erich Metzger, and the two have been together eight years. Four-and-a-half years ago, as Cohen handled health care and development work for a non-governmental organization in East Africa, the couple adopted from the region their now 16-year-old son, Solly Cohen.

Cohen said being gay has informed his politics because the LGBT community has “been an activist community for a long time,” citing the work of ACT UP in New York during the AIDS epidemic.

“That has been an important part of the way that I’ve thought about political campaigns,” Cohen said. “It’s not just about advertisements and what-not. It has to be about more than that. It has to be about community engagement and offering people, often disparate groups of people, something they can believe in and work for and feel excited about.”

Cohen wasn’t involved in the 2016 Clinton campaign, but nonetheless sees lessons learned from presidential election that for his super PAC amount to an “attempt to do things differently.”

“My view of much of the Clinton campaign is they ran a really good sort of by-the-book traditional campaign for president and that they understood that they were going to maximize votes out of voter registration and that became of the focus of the field effort, etc.,” Cohen said. “But, you know, clearly we’re in a different environment, and so, that kind of playbook that I think kind of worked for Obama in many ways and they used as well proves to not be sufficient in this new environment that we’re in.”

Based on the 2016 election, Cohen said the approach to elections should be “evidence-based, smart approaches that we’ve tested,” but at the same time “a real emphasis on experimentation.”

“One of the things that I will say was incredibly important to me about the Obama campaign was that emphasis that it placed on experimentation and rigorous testing, and those are certainly things that I think are essential,” Cohen said. “Bringing some creativity into politics, I think, is really important and a real emphasis for us.”

With President Trump’s approval rating at all-time low of 32 percent, Cohen said “Democrats are clearly energized and excited to get out to vote,” but that may help in some circumstances, but not in others.

“Voters in states all over the country understand pretty well the different roles that different levels of government play, so I don’t think that they are necessarily going to tie Republican state legislatures to Trump,” Cohen said. “On the other hand, many of them have come out and expressed support for Trumpcare, and so, those folks, I think absolutely the voters will hold them accountable for their support of policies that people have honestly negative feelings about.”

As new elections fast approach, Cohen cautioned against placing too much hopes on Trump’s unpopularity doing the hard work needed for Democrats to win.

“I don’t think we can rely on that in any way whatsoever,” Cohen said. “I think that campaigns have to do the work. That means really building a strong game, and then for us, as an outside organizations really providing the kind of bigger picture air cover or messaging that they may need to score a win.”

LGBTQ activists view Obama as staunch champion of their cause