From Sarasota to Pulse, Tampa Bay filmmaker Sandi Hulon looks at the life of Eddie Sotomayor in ‘One of 49: A Legacy of Love’

In the middle of the night on June 12, 2016, documentarian and filmmaker Sandi Hulon was doing the same thing as many of us throughout Orlando, Tampa Bay and across the world: sitting with eyes glued to the TV in horror as we watched the outside of Pulse nightclub covered in blinking blue and red lights from emergency vehicles on the national news.

There was a shooting. By the morning we would know that 49 were killed and 53 injured in the nation’s worst mass shooting in modern times. But in those early hours, waiting to find out what happened, we got the identity of the first confirmed victim. He was a 34-year-old male from Sarasota. His name was Eddie Sotomayor.

Hulon has gotten to know Eddie very well, even though she has never met him or had a conversation with him.

“I have this photo of Eddie hanging on my refrigerator. I get up every morning and come around that corner and I share a high five with him and say ‘Ok, Eddie, what have you got today?’ Every morning I do that; and there is something every day that comes in, whether it is a text message or an email or something from Facebook,” she says.

More than a year in the making, Hulon is developing a documentary on the life of Eddie in a film called One of 49: A Legacy of Love. Hulon spoke with Watermark about the status of the film, who Eddie was and the love that has come out of tragedy. LOVE IS LOVE: Sandi Hulon visits Pulse in Orlando after the shooting. Photo by Ariana Shelton.

What led you to pick Eddie as the subject to tell this story?

I was at my home in St. Petersburg. I got a phone call asking if I could put a film crew together and come down to Sarasota to film a memorial service for one of the Pulse victims. The person told me that friends and family of Eddie would be there and I assumed it was going to be like a candlelight vigil or something of that nature. When I walked in I realized it was Eddie’s funeral they had asked me to document and record for the family.

Wow, that must have been a shock to walk into that situation.

I remember pulling up, getting out of the car and seeing the hearse. I realized that this was more than just the vigil, this was is funeral service. I said to my [production] partner “I can’t do this,” and she looked at me and said “yes, you can, we can do this.” I grabbed my video camera, she grabbed her still camera and we came in through heavy security at that time, of course.

What were you feeling as you walked in?

I remember when we walked in all of the flowers, they were so beautiful. And I saw top hats everywhere. Walking up I was scared and nervous and every other emotion you can think of, but as soon as we got in it was surprisingly calming. So we filmed the memorial.

I saw some of the photos taken during the filming, and I saw a lot from St. Pete Pride that year. Yes, the memorial was also St. Pete Pride weekend. Al and Chuck Travel, Eddie’s employer, provided buses to take anyone who wanted to go up to St. Pete for Pride. People were wearing their Eddie t-shirts and top hats. I remember starting to march with all these people who knew and loved Eddie; his mom – I could see a big smile on her face with what was going on – and Louis, his partner at the time. It was really amazing and very emotional.

We go around the corner and I see it: I’m struck with the love, emotion and sweet kindness that just envelops me as I literally make this corner. It is all the way down the entire parade route. People are sticking out their arms for hugs and saying “I’m so sorry.” Everyone just wanted to hug, complete strangers coming up to us. It was just this really emotional moment of walking and hugging and walking and hugging. I was walking along filming— and I have this on film— you can hear me just saying over and over “thank you, thank you, thank you,” and you can hear me sobbing. It was just so much love and emotion.

When did you realize that this was going to go from documenting Eddie’s funeral to a feature length documentary of who he was?

When I got home that night after Pride, my partner and I just looked at each other and said, “This is much more than a memorial film for the family.” It was a couple of days after that that we got on the phone with Al Ferguson [of Al and Chuck Travel] and said, “We want to do this and more.” Al was all over it. He opened his doors for us and let us into the office where Eddie worked. Eddie worked as the national brand manager for Al and Chuck Travel. We filmed his desk. It was left just as it was. We did it not to be morbid but to show that Eddie literally got up from his desk on Friday expecting to return to this spot and never got to. There were reminders and notes that he had left for himself. The only thing that was different is that people had come in and placed a couple of roses on his keyboard.

You said when you got home you realized this was more than just that one day you filmed. What is it that this film has turned into?

This film that started as documenting his memorial became a three-part story for me. The first part is about Eddie, his family and friends. I have interviewed his mother, his sister, his aunt. The second part is on the changes in the Christian faith community in Sarasota, up through to Orlando. I watched a faith leader apologize to the LGBTQ community for the way they have been treated by the religious in this country. The third part is about resilience. How people are able to come back from a tragedy like this and be strong and powerful. People have done some amazing things in light of this tragedy and we show and document some of that in this film.

You never got the chance to meet Eddie, did you?

No, and here is something strange: When I was watching the news coverage and waiting to see the names of the victims, to see if I knew someone, he was the very first victim they announced. His picture popped up on the screen and it stopped me in my tracks. I thought, “I have seen him before.” I can never claim that I have met him and had a long conversation, but I do feel like I know him now.

It’s amazing how you can know somebody so intimately, more than some people who might have seen Eddie all the time, and never met them. Have you had any moments in putting this film together that stick out and made you stop and have to gather yourself? ON THE SET: Al, Eddie’s employer and friend, speaks to the film crew. Photo by Ariana Shelton.

Every day I am overwhelmed by the love that is popping up all around me because of Eddie. That’s why we named the documentary One of 49: A Legacy of Love. There has been such an outpouring of love. Eddie’s family has embraced me and this film. It has brought so many people together and brought me to Eddie. This isn’t just another film for me, or just another project. This film is my passion project for life.

Principle photography is nearly complete and Hulon hopes to begin editing by mid-August. From there she wants to take the film to festivals across the U.S., and the world. Hulon has spoken with more than two dozen people who knew Eddie— family, friends and co-workers— and hopes to have the film completed by Nov. 1. OneOf49.com has information, updates and ways you can contribute to help finish the documentary. 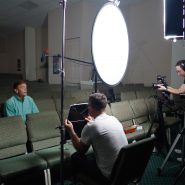 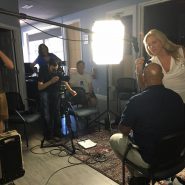 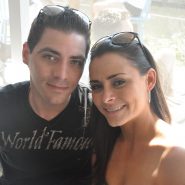 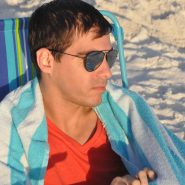 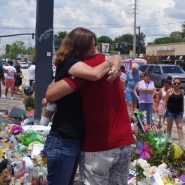 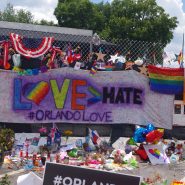 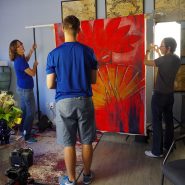 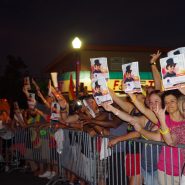 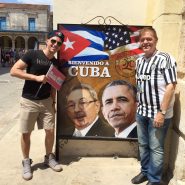