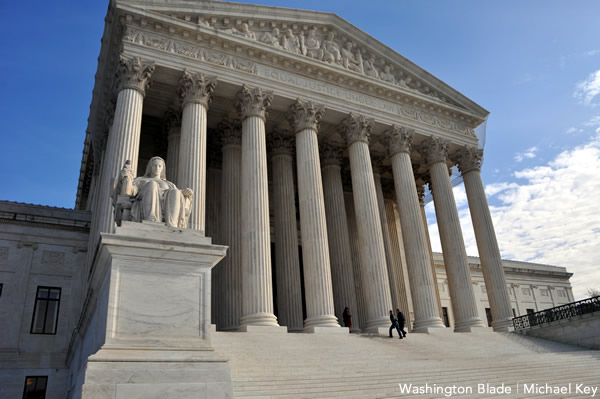 The U.S. House is set to vote Thursday on an amendment that would bar transgender people from receiving transition-related health care, such as gender reassignment surgery.

The amendment, submitted by Rep. Vicky Hartzler (R-Mo.), would deny funds to Defense Department for providing medical treatment — other than mental health therapy — related to gender transition under the health system for service members. That would mean transition-related care like hormone therapy and gender reassignment surgery would be off limits to transgender troops.

According to the American Civil Liberties Union, the amendment would also the military from paying for transition-related care for the dependent of a service member, such as a spouse or a child who’s transgender.

The amendment will likely come before the House floor on Thursday during the consideration of the fiscal year 2018 defense authorization bill, a major defense policy legislation that would authorize $697 billion in annual funds for the Pentagon.

Once the amendment comes to the floor, it will be the first time in history the U.S. history has considered a measure specifically aimed at rolling back rights for transgender people.

“Rep. Hartzler’s attack on active duty troops and their families is unconscionable,” Peters said. “The proposal would bar access to medically necessary health care for military families and transgender service members who put their lives on the line for this country. It puts their health at risk and undermines military readiness by stripping away the ability of medical professionals to ensure their patients have the care they need and deserve. It is imperative that the House of Representatives reject this harmful amendment.”

The House Rules Committee met Wednesday night to consider amendments to the defense bill. Although the committee never voted on the Hartzler amendment, Republican leadership made the amendment in order backstage as part of the rule for floor consideration.

Rep. Jared Polis (D-Colo.), who’s gay and co-chair of the LGBT Equality Caucus, offered an amendment during committee to strike the anti-trans measure from the rule, but his effort was defeated by an 8-2 party-line vote.

“Medical treatments are between doctors and patients,” Polis said before the vote. “There’s not an appropriate issue for somebody to prevent a particular kind of medical treatment from being given. The Hartzler amendment undermines readiness by arbitrarily limiting medical care for transgender service members.”

Rep. Pete Sessions (R-Texas), chair of the Rules Committee, said during the committee consideration of the amendment gender reassignment surgery “is seen as elected surgery,” despite major medical groups that deem the procedure medically necessary in some cases for transgender people.

The Rules Committee also considered a gay-related amendment from Polis to direct the Pentagon to conduct a study on the military impact of the Food & Drug Administration’s restriction on blood donations from gay and bisexual men. That amendment was defeated on an 8-2 party-line vote.

Sessions said the study on the blood ban wasn’t made in order because the FDA has jurisdiction over the blood ban, not the Pentagon.

“I can’t figure out what readiness had to do with giving blood,” Sessions said.

Notably, Rep. Ken Buck (R-Colo.) rose from his seat before both Polis amendments were discussed, then returned after they were debated on voted upon, according to a Democratic source familiar with the committee. That could have meant Buck didn’t want a recorded vote on either of those LGBT-related measures.

The Missouri Republican proposed — then withdrew without a vote — an amendment barring transgender people from serving in the armed forces, but threatened to reintroduce it if the Pentagon didn’t reverse the Obama-era policy change in favor of openly transgender service.

Shortly afterward, the Pentagon announced it would delay a plan to allow openly transgender people to enlist in the armed forces by July 1 for another six months, although the policy barring the military from kicking them out remains in place. Hartzler introduced her amendment despite the rollback, although it seems less ambitious than her threat during committee.

During the committee markup, Hartzler cited a dubious figure that paying for gender reassignment surgery for U.S. troops would cost $1.35 billion over the next 10 years with only 30 percent of individuals electing to transition. That figure is significantly higher than the RAND Corp.’s estimate that those surgeries consume between $2.4 million and $8.4 million annually out of the Pentagon’s multi-billion dollar budget.

It’s unclear where Hartzler came up with her figure. Hartlzer told USA Today she believes the RAND Corp. study was “flawed” and reportedly said her staff came up with its own figure using research from other sources.

Another amendment submitted to the Rules Committee by Rep. Brad Schneider (D-Ill.) would express the sense of Congress LGBT service members, including transgender personnel, should “be commended for their service to the United States.” Neither the committee, nor the Republican majority, made that amendment in order.

Johnny Michael, a Pentagon spokesperson, declined to comment on the Hartzler amendment on the basis that is standard practice for the Defense Department.

“The Department does not comment on pending legislation,” Michael said.

“Bigotry is the last thing this country should offer any brave man or woman who volunteers to defend us,” Kennedy said. “By inserting Congress into the personal medical decisions of certain service members, this amendment tells thousands of Americans willing to pay the ultimate sacrifice that they are not entitled to the same rights as the soldier they stand next to. Transgender Americans, in uniform or not, deserve better than this hateful amendment from those elected to represent them.”

Sen. Warren’s new bill could give gay couples refund on back taxes

‘The L Word’ lives on: Groundbreaking series to return to Showtime