As St. Pete Pride celebrates its 15th Anniversary, we look back on how it all got started

It may surprise a lot of people outside of the Tampa Bay area, but St. Pete Pride is the largest Pride celebration in the state of Florida. They obtained that title in 2006 and continued to grow, welcoming more than 100,000 people in St. Petersburg the last weekend of June in 2012, then nearly a quarter of a million in 2015.

This year, St. Pete Pride continues to grow and expand with Pride splitting the parade from the street festival in the Grand Central District and moving the route to downtown St. Petersburg along Bayshore Drive. More than a dozen events will be happening in the days and weeks leading up to Pride weekend, this year happening June 23-25, and more people than ever before are expected to attend these events all over Pinellas County.

As we approach St. Pete Pride at the end of LGBTQ Pride Month, we look back at that first year and see how, where and why we now have the state’s largest Pride here in the ‘Burg.

St. Pete Pride began in 2003, originally to fill a void in the community left open the previous year by Tampa’s Pride celebration known as PrideFest.

“Tampa Bay Pride imploded in 2002, and it had gone the way of porn-star cruises and big-ticketed events and very little community involvement,” says Brian Longstreth. Longstreth is part owner of Punky’s Bar and Grill as well as the owner of Gay St. Pete House, both in St. Petersburg, and is one of the founders of St. Pete Pride.

The final PrideFest was held July 4th weekend in 2002 and was considered by most who attended to be way off the Pride mark, consisting of high priced items such as a business expo, a rock concert at Raymond James Stadium and a huge wet party at the Florida Aquarium. There was no parade.

Tampa Bay Pride spent more than $100,000 in 2002, leaving nothing to continue the following year.

Longstreth, along with LGBTQ business owners, activists and community movers and shakers in St. Petersburg, began to organize what they felt Pride should have been focused on all along: the community. 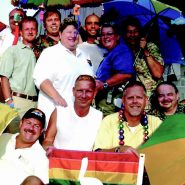 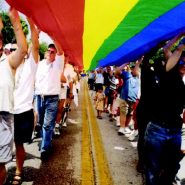 FLAG DAY: It took hundreds of volunteers to hold up a 900-foot rainbow flag. Photo from Watermark Archives 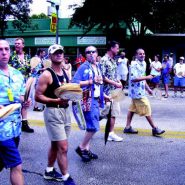 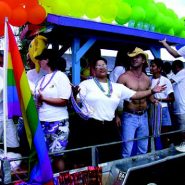 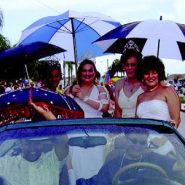 DRIVING DIVAS: Were these crowns borrowed from the Miss Florida pageant, taking place across town? Photo from Watermark Archives

They held their first organizational meeting on Feb 27, 2003, at Grand Central Station. More than 100 people attended that meeting. Within a few weeks, St. Pete Pride had over 30 sponsors and nearly $100,000 in cash and services donated. Another change they implemented was moving the date of Pride from early July to the end of June to be in line with the celebration of Stonewall, the reason for the season.

“Really, it was Georgie’s Alibi, the Grand Central Station, myself and a couple other businesses in the district and we just started putting it together,” Longstreth says. “We worked closely with Equality Florida; we talked with the owners of the Suncoast Resort, who did a Pride celebration on July 4th weekend, and got them to move to our Pride weekend and tie in with our event, and they did, and that cooperation was great.”

St. Pete Pride not only got Pride back to the community level, it also introduced a lot of visitors to the Grand Central District, an area, along with the Historic Kenwood Neighborhood, that was attracting a lot of LGBTQ attention.

“St. Pete Pride started to happen at the same time the Grand Central District was attracting more gay and lesbian owned businesses,” Longstreth says. “You had The Garage and Georgie’s Alibi; Suncoast Resort was bringing a lot of people from out of town to St. Pete, but it’s always been a little different. It’s not usually that big nightclub crowd, but it’s more of the arts and entertainment and beaches.”

Getting an event set up in a city the size of St. Petersburg requires a lot of planning, but when you have roughly 90 days to get it all put in place it helps to have friends in high places.

“One of the good things that happened for us when we were getting the event set up was that the deputy administrator at the city was Tish Elston,” Longstreth says. “As with any city event there are a lot of departments involved and I called her and said ‘We are thinking of doing this event’ and she said ‘Okay, be at my office next week,’ and she had all those departments there and basically went through the checklist and said, ‘Here’s what has to happen this time and this time and this time, and then you can have your event.’”

St. Pete Pride had the location and the permits, and they were about to have a supportive voice in the local government.

“There was mostly silence from City Hall,” Longstreth says. “I don’t think anyone worked to actively stop [St. Pete Pride] from happening but there certainly wasn’t a level of support that we enjoy now from Mayor Rick Kriseman and the rest of City Council.”

Kriseman, who at the time was a city councilmember, was the only member to speak out for Pride.

“Robert Danielson (who was director of marketing & public relations for St. Petersburg at the time) drafted a proclamation and Rick Kriseman was the only city councilmember that would sign it,” Longstreth says. “And he was also the only one who attended the event.”

Longstreth and the rest of the board began to piece together the events that would become the first-year celebration of St. Pete Pride. 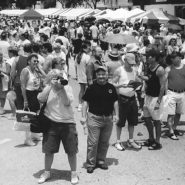 STREET CRED: An estimated 8,000 to 10,000 crowded Central Avenue for the post-parade Streetfest. Photo by Rex Maniscalco 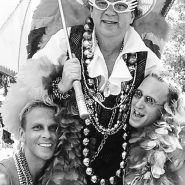 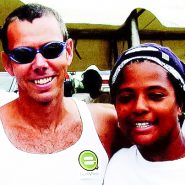 PROUD PAST: Stratton Politzer and Nadine Smith of EQFL. Photo from Watermark Archives 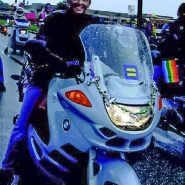 “Suncoast Resort would bring in entertainment for their July 4th celebration, and since they were moving it to Pride weekend it looked like they were there for our celebration, but really they were hired on by Suncoast Resort,” Longstreth says. “Everything we did was all geared towards being more community based. We wanted to keep the festival booths priced low so small businesses and non-profits could participate. We wanted to make sure anyone could participate. Actually the parade was free… or the promenade.”

The promenade was a combination march and parade in the Grand Central District that started at Georgie’s Alibi and proceeded east on 3rd Ave. N. to 30th St., then south to Central Ave., and ended on Central Ave. and 26th St.

“We made it part march and part parade because we wanted to make sure it was a little bit political as well as a celebration,” Longstreth says.

The promenade kicked off Saturday, June 28, 2003 at 11:00 a.m., just as the rain started to fall, but that didn’t bother anyone. The theme of the promenade was “Parasols on Parade,” so hundreds of colorful parasols went up as nearly 800 marchers representing more than 60 groups, businesses and organizations marched through the streets of Grand Central throwing beads to the thousands of attendees on the sidelines.

At the end of the marchers was a 900-foot rainbow flag which stretched down Central Avenue. The display was so fantastic that the promenade made it onto CNN’s national wrap-up of Pride events across the U.S.

Following the promenade, Central Avenue, between 24th and 26th Street, was filled with exhibitors, vendors, food and rainbow flags as people celebrated Pride. About 120 vendors welcomed 10,000 people into the Grand Central District, where they listened to local musicians perform, activists give speeches and enjoyed the community – getting back to the basics that had been forgotten at PrideFest.

“That was kind of the message and the direction we wanted to go. We wanted to be more in touch with the community,” Longstreth says. “Another cool effect we didn’t think about much was that the parade route, the promenade route, went through historic Kenwood. You had families with small children sitting on their front yards enjoying the parade. And you talk to the parents and they are very adamant about making sure their children understood diversity and that everyone is welcome in the neighborhood, and that was kind of a cool experience.”

St. Pete Pride continued the celebration into Sunday with an Equality Florida Family Values picnic and an official Pride T-dance at the Suncoast Resort, and by the week’s end the board was not only impressed with the turnout for St. Pete Pride, they were also happy that they were able to give back to the community, namely in the amount of $10,000.

“I remember going to an InterPride conference after our event saying ‘What do you do with the leftover money?’ And they were just shocked that we had leftover money after the first year,” Longstreth recalls. “We have always kind of made that a large component of the fundraising and the money that was raised. We always try to make sure a good amount of it goes back to the community to assist smaller organizations that needed help getting started and to help build community.”

Longstreth says the key to the success of that first year, and the 14 years that followed, was that there was good communication between the board and the organizers and the businesses that were supporting it.

“We always tried to make sure any issues that came up, they got discussed and clarified. What needs to be done to make sure next year is better and continue the growth?” he says. “I always heard from other organizers of Pride events that they look at St. Pete Pride as kind of a new model to where you didn’t have to spend all this money on entertainment to make a Pride event happen. It was more about community.”

Pop pioneer Alison Moyet returns with a new record, a new tour and her same recognizable sense of aesthetic transcendence and attitude