Gavin Grimm testifies on civil rights after 100 days of Trump

By : Chris Johnson of the Washingston Blade, Courtesy of the National Gay Media Association
Comments: 0 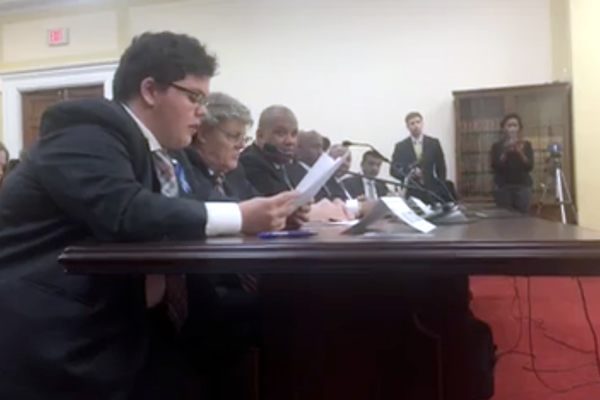 Transgender student Gavin Grimm testified before Congress Thursday on the experience of his Virginia high school denying him access to the bathroom consistent with the gender identity as well as harms the Trump administration’s withdrawal of pro-trans guidance has caused for transgender people.

Gavin made the remarks during a congressional forum hosted by U.S. House Democrats on the state of civil rights after the first 100 days of the Trump administration. Witnesseses sharply criticized the Trump administration — in particular the U.S. Justice Department under U.S. Attorney General Jeff Sessions — for failing to live up to equal protection under the law.

Currently suing his school for bathroom access in a lawsuit the U.S. Supreme Court was once poised to consider, but later rejected, Gavin recalled the pain he felt during hearings in which the Gloucester County School Board decided to refuse to treat him consistent with his gender identity.

As Gavin narrated his story, the microphone system for the room in the Rayburm House Office Building cut out, prompting one forum participant to quip, “The Democrats do not control this room.” Invited by Rep. John Conyers (D-Mich.), who was chairing the forum, to speak closer to the dais from a podium, Gavin continued his story.

Recalling the pledge from the White House that President Trump would be “respectful and supportive of LGBTQ rights,” Gavin said the administration’s decision to nix Obama-era guidance assuring transgender kids bathroom access in accordance with their gender identity “could not have been more damaging for trans youth.”

“The guidance had a very simple message: Treat trans students with dignity and respect them for who they are,” Gavin said. “Treating trans students with dignity and respect should not be controversial. The decision to withdraw the guidance sent a terrible message to some of the most vulnerable people that President Trump – the leader of our country – and his administration do not care about protecting you from discrimination.”

After Gavin completed his testimony, attendees at the forum clapped for a lengthy amount of time. Conyers commended him, saying he’s a “courageous young man and you deserve our support and applause.”

Catherine Lhamon, chair of the U.S. Commission on Civil Rights and former assistant secretary for civil rights at the Education Department under the Obama administration, made the transgender guidance rollback a major point of concern during testimony in which she said civil rights under the Trump administration has been “horrendous.”
“It will not surprise this body that that withdrawal offended me because I signed that guidance when I was assistant secretary of civil rights,” Lhamon said.

Lhamon called Trump administration claims the guidance was withdrawn because of improper procedure and incorrect interpretation of Title IX of the Education Amendments of 1972 “categorically untrue,” citing “the many years that all the relevant agencies” spent investigating the facts and speaking the school administrators.
“To think more that whether a federal law that Congress wrote that says explicitly that no person in the United States shall be subject to sex discrimination in school applies to transgender students questions the very humanity of transgender students,” Lhamon said.

Lhamon also took issue with the appointment of Roger Severino, a former researcher for the anti-LGBT Heritage Foundation, to the role of assistant secretary for civil rights at the Department of Health & Human Services. Once in the position of being critical of the Obama administration’s efforts to ensure transgender people have access to transition-related care, Severino will now be charged with protecting transgender people in health care.

“I will never forget how I heard from former HHS civil rights director about a case in which emergency medical professionals refused to treat a transgender women because she is transgender,” Lhamon said. “She later died, although she had a better than 35 percent of survival had she received appropriate and timely medical care. It should go without saying that the director of HHS civil rights should be committed to ensure the fair medical treatment for all persons, regardless of identity status.”

The issue of transgender rights was but one issue before the forum that sought to address the multitude of challenges the civil rights community after 100 days of the Trump administration.

Conyers, the top Democrat on the House Judiciary Committee, expressed a dismal view of the current state of civil rights as he chaired the forum, referencing a “documented loss in the overall climate of equality” and rise in hate violence since the 2016 election.

“Minority communities have been justifiably concerned about the continued role of the federal government in protecting civil rights,” Conyers said. “The Trump presidential campaign promised meaningful changes that would benefit minorities in the area of crime, equal justice and economic equality, his political allies and surrogates to the media have sent a different message that served to heighten national divisions and anxiety.”

A central issue was the decision this week of U.S. Attorney General Jeff Sessions to review the consent decrees the U.S. Justice Department had arranged with police departments after patterns of unconstitutional racial discrimination and excessive force, including the shootings of black men.

“This administration insists that policing is a purely local matter into which the federal government should not intrude,” Bains said. “But we’re not talking about a federal takeover of these departments. We’re talking about the enforcement and protection of constitutional rights. There is no federalism problem.”

Ron Davis, former director of the Office of Community Oriented Policing Services at the Justice Department, invoked the words of 19th Century British statesman Robert Peel to describe the appropriate relationship between the police and communities as defined under the consent decrees.

“People comply with the law not because of they are afraid of the police, they comply with the law because they believes the law is fair, just and will be enforced appropriately and without bias,” David said. “People should be afraid of police. They should not have to run from them because they’re going to be deported or think that every infraction will result in arrest.”

But Sessions’ order to review the consent decrees was but one issue to witnesses pointed as evidence the Trump administration was failing to live up to responsibilities on civil rights.

Joe Rich, co-director of the Fair Housing & Community Development Project, raised as a civil rights issue the rollback of voter access to the polls, including early voting cutbacks and the imposition of state voter ID laws.

“Given this tiny incident rate for voter impersonation, the report concluded that is more likely that an American will be struck by lightning than he will impersonate voter at the poll,” Rich said.

Rich said he Justice Department had “vigorously prosecuted” against the voter ID law in Texas for three years, but the U.S. government has “reversed course” with Sessions at the helm in “an action of great concern for all of us doing voting rights work.”

Roy Austin, former director of the White House Office of Urban Affairs, Justice & Opportunity under the Obama administration, took particular issue with the travel ban Trump signed barring immigration into the United States from six Muslim countries, calling it an attempt to “legalize discrimination against an entire faith.”

Although the administration billed the measure as an means to keep potential terrorists from the United States, Auston said “state-endorsed discrimination diminishes public safety.”

Chief Hassan Aden, a member of the steering committee for Law Enforcement Leaders to Reduce Crime and Incarceration and former chief of police of the Greenville Police Department, took issue with greater authority of U.S. Customs & Border Protection to detain travelers entering the United States.

“What’s happening now is there’s sort of this second-class of American citizen being built out, and it involves names and religious preferences, and it’s something that we all need to resist and work against,” Aden said.

Aden recalled his own experienced this year being detained by CBP at JFK International Airport upon re-entry into the United States, which attributed to his Muslim-sounding name. Aden said this incident stands out because he travelled internationally in years past, including five times last year, without issue.

“My name being Hassan Aden, I think, set off a flag,” Aden said. “I utilized my platform and my reach to highlight this issue and give it a voice. There are so many people that this happens to. My detention was 90 minutes. There are people whose detention is significantly longer.”

Rep. Sheila Jackson Lee (D-Texas) held nothing back in her assessment of Trump on civil rights in the wake of the Justice Department reviewing consent decrees with police departments.

“This may be the Armageddon,” Lee said. “We may be seeing the most dangerous Department of Justice that we have seen in decades. I don’t think it is hyperbole; I don’t think it’s hysteria.”

Referencing the plight Gavin continues to face by being denied bathroom access in his school, Lee assured him, “You are not alone. We know the decision of the Supreme Court, but we’re not finished with bringing you relief.”

Other lawmakers present at the hearing were Rep. Bobby Scott (D-Va.), top Democrat for the House Committee on Education and the Workforce; Rep. Cedric Richmond (D-La.), chair of the Congressional Black Caucus; and Rep. Eddie Bernice Johnson (D-Texas).

At the end of the hearing, Lee asked Gavin for his thoughts on the impact of the Justice Department taking an ideological position against transgender rights, which Gavin would only be harmful.

“We see a very real and immediate negative impact on those communities,” Gavin said. “The transgender community is uniquely vulnerable already in that we have less legal protection, we have a higher rate of hate crimes, mental illness, homelessness, unemployment, and then to have a complete and total lack of administrative support, and, in fact, a presence of a administrative intimidation or disregard, the effects of such a negative message across the board would be absolutely devastating.”

Chris Johnson of the Washingston Blade, Courtesy of the National Gay Media Association

Both sides of the debate speak out following transgender bathroom decision