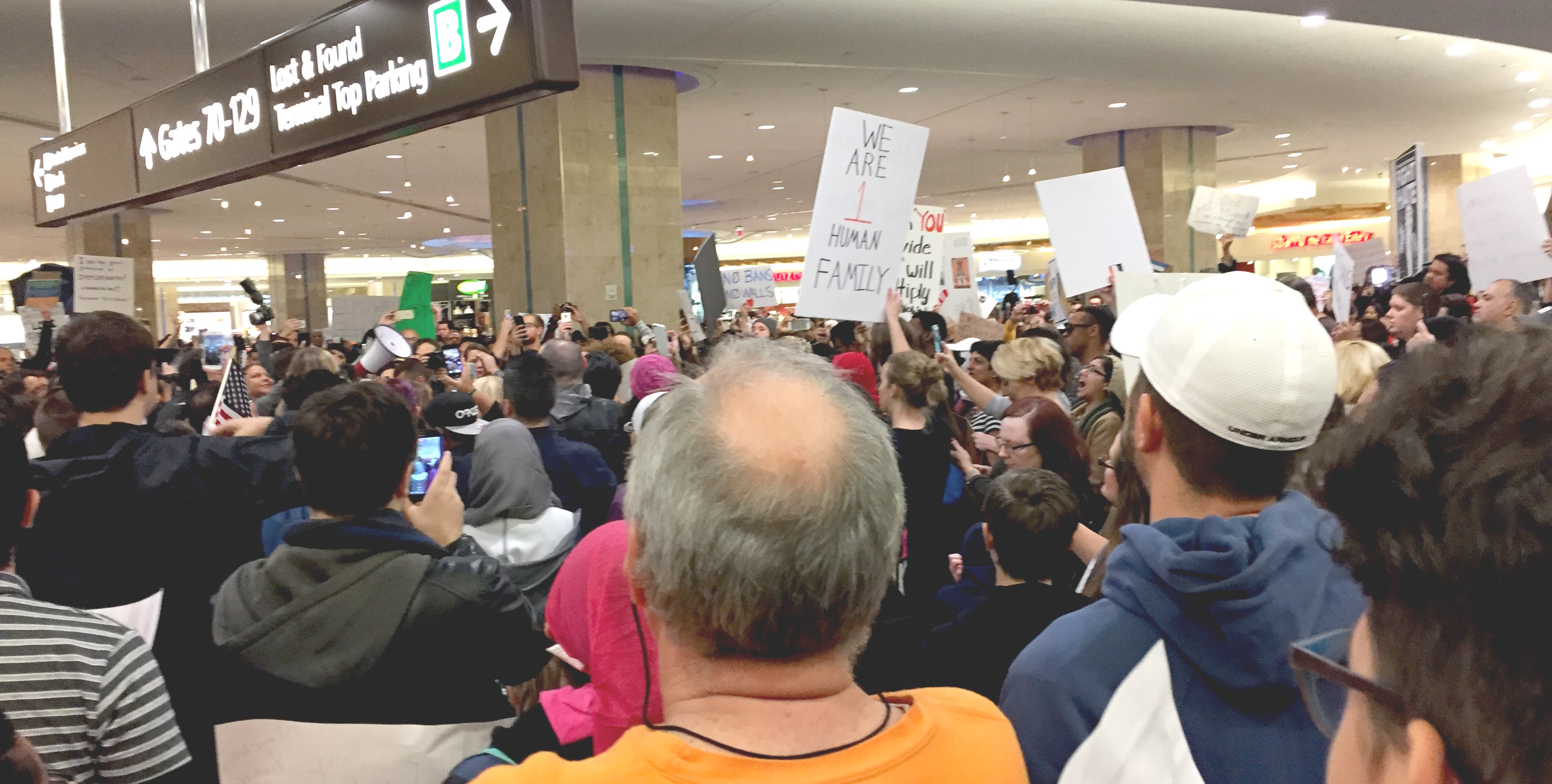 Orlando – On Jan. 29, amid of flood of hurried information and the confusion that comes along with it, more than 1,000 people of Orlando (and those who love them) convened upon the Orlando International Airport to voice their solidarity for their marginalized populations, LGBTQ and Muslim populations among them. As the gathered crowd was educated about the lines of peaceful protest against the backdrop of Lee Vista’s The Haven Bar – a site offered by the strip-mall’s owner (and former Libertarian Orlando mayoral candidate) Matthew Falconer for gathering – participants were instructed, in typical protest parlance, to not descend to the level of name-calling that has made anti-gay, anti-Muslim and anti-immigrant conjecture the focus, an act that was sure to be offered at a high-profile event in one of the busiest travel meccas in the world.

“Do not engage with the opposition,” that was the key point. It will get you nowhere.

There was little opposition at the event within the airport. Speakers from across the spectrum of progressive causes were in abundance, each holding the same megaphone and speaking the same message: “No ban, no wall”; “This is what democracy looks like.” Employees of adjacent stores in Gate B applauded the efforts.

The protest came on the heels of President Donald Trump’s extended flurry of executive orders during his first few weeks in office, the most contentious of which were aimed directly at immigration and LGBTQ rights. The overlap there was, to most involved, the fact that the shooter at Pulse Orlando, the one who took the lives of 49 (now 50) and ruined the lives of 53 others, was part of a larger picture of racial, sexual-orientation and religious unrest. Without most being aware, three people were in detainment at OIA at the time of the protest and being assisted by attorneys and congressmen – three people with green cards.

Throughout the weekend, similar protests were being held at airports nationwide. In the end, a stay and then a stop were put on Trump’s machinations to enact a so-called “muslim ban,” with politicians and religious leaders alike calling out the behavior of the president. The avalanche of conservative messaging swept up many within the United States’ – and Orlando’s – marginalized communities.

“I’ve pushed this notion that immigration issues are queer, LGBTQ issues,” QLatinx co-founder Christopher Cuevas says. “What is to happen and what has happened already is terrible. “When we talk about discrimination in the LGBTQ community, it’s a shared oppression.”

Cuevas points to deeper tears in the social fabric, all the way down to solitary confinement in private prisons for those who are transgender or Muslim. That, and the fear of deportation for immigrants of all stripes.

And although a stay – then a stop – were issued in federal courts last week to cease Trump’s bans, and although many people of faith do not overlap on certain issues of sexuality or sexual orientation, the communities are coming together to avert a societal crisis, he says.

“This is a stop,” he says. “It’s still very important that people rally behind these causes. This is where we have to stand as queer people with the Muslim community, the undocumented community, while always pushing for adequate protections for the people that are here.”

In the aftermath of the airport protests nationwide, Orlando, one of the nation’s most popular hubs for international travel, has raised its hackles to keep the fight going. A press conference was held with representatives from the Council on American-Islamic Relations and representatives from local legislative offices last week followed by a protest outside the office of U.S. Sen. Marco Rubio, R-Fla.

“We generally support additional vetting for many of those entering our country from nations where the United States has identified there are serious concerns regarding terrorist activities and planning,” the statement said. “But given the broad scope and nature of these policy changes, we have some unanswered questions and concerns.”

“Equality Florida’s purpose is to secure equality and justice for Florida’s LGBTQ community and from the beginning we embedded a commitment to combating racism and sexism into our mission. We understood then that LGBTQ people live at the intersection of multiple identities, because the LGBTQ community includes people of all races, all genders, all economic statuses, and all ethnicities. The challenges LGBTQ people face as women, people of color, and people of diverse ethnicities are amplified by anti-LGBT discrimination,” it says, adding, “That is also why we will continue to speak out against President Trump’s egregious attacks on the lives, health and wellbeing of millions of women, immigrants, Muslims, Native Americans and LGBTQ people.”

But for Cuevas, it’s even more personal than that.

“These are human lives that are at stake,” he says. “This isn’t an abstract notion. These are people who are afraid. ‘How do I protect the people I care about? How do I survive?’”