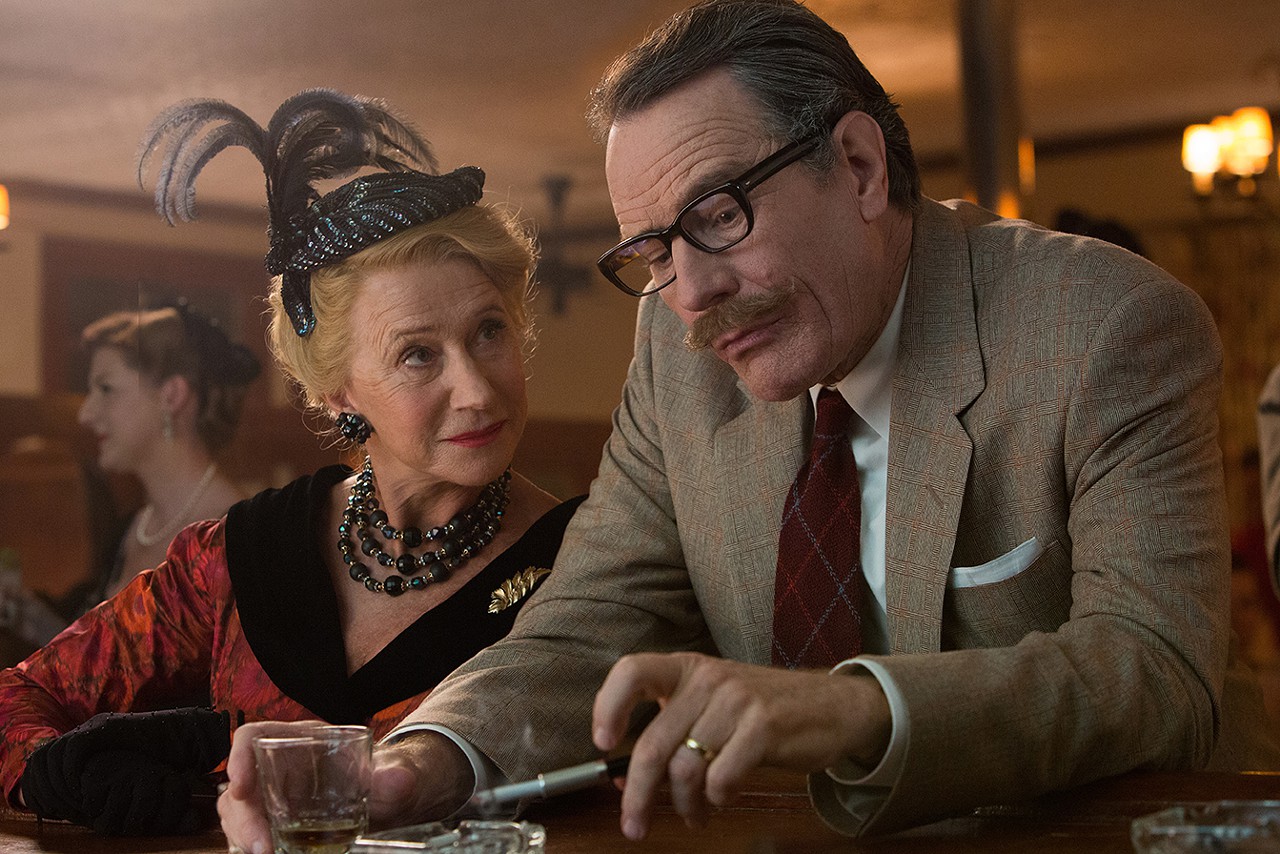 Bryan Cranston got nominated Best Actor for playing Dalton Trumbo; he is better than this movie. Trumbo was the brilliant screenwriter who was blackballed in the 1950s as a Communist. Trumbo was also better than this, too. Trumbo wrote Spartacus, Papillon, Johnny Got His Gun, and the Oscar winners The Brave One and Roman Holiday.

It’s not just ironic, it’s somewhat sad that this script about a genius scriptwriter swings between good and awkward, blunt, and even boring. Only great acting raises this up. Trumbo was at the very height of his career – the highest paid movie writer ever – when he was called before the House Un-American Activities Committee. The man’s testimony was witty and brave, which meant his career was left in shambles. He, his family, and his friends all suffered. For years, he looked for work, writing scripts under pseudonyms. He always struggled to balance his personal beliefs with the need to survive.

Given that the man wrote Spartacus, it seems there’d be a lot of ways to frame this story about a hero against an unjust system. Discrimination against political differences is a subject that, sadly, in America, will always be timeless. Despite the upstanding cast, the beautiful sets, the nifty costumes, and the slick cars, Trumbo lumbers between graceful and artless. Happenstances pile one upon another to tell the story quickly; it robs the film of honesty.

Politicians, Hollywood elite, and the press – mostly led by famous gossip columnist Hedda Hopper – cornered Trumbo. Hopper seems to have had it out for the writer. This was partially because Trumbo made himself an easy target. However, Hopper also found her vitriol could sell more papers. She landed on the cover of Time.

Mirren has Hopper’s supercilious nature, as well as her strong opinions and clipped elocution, down pat. It’s just as easy seeing Mirren getting attention for Supporting Actress as it is for Cranston’s nomination. They add a shine to the project. Jay Roach is an odd choice as a director for Trumbo.

Trumbo is an odd choice for director Jay Roach (Borat, Meet the Parents). Still, he sometimes finds the memorable shot. Unfortunately, Roach casts the smaller parts unevenly; Stuhlbarg (A Serious Man) brilliantly plays Edward G. Robinson, O’Gorman does a passable Kirk Douglas, Goodman has fun as trash producer Frank King, but Elliott (TV’s J.A.G.) does a lousy impersonation of John Wayne. Roach also apes the ‘50s style, in set decoration, filming, and acting. The problem Roach runs into is this style – now half a century old – has a layer of stiff artifice to modern viewers. Roach should have shot for a more realistic feel all around.

The rest of the problems with Trumbo are in the script, by John McNamara, a television writer with a mediocre record at best (Lois and Clark, Spy Games). He adds no deep emotion, and his plot occurrences rings false.

Trumbo wrote four-star and five-star films. This biopic doesn’t hit those levels. What Congress and the press did to blacklisted people’s lives is criminal; what screenwriter McNamara does to Trumbo’s life here is just a disappointment.