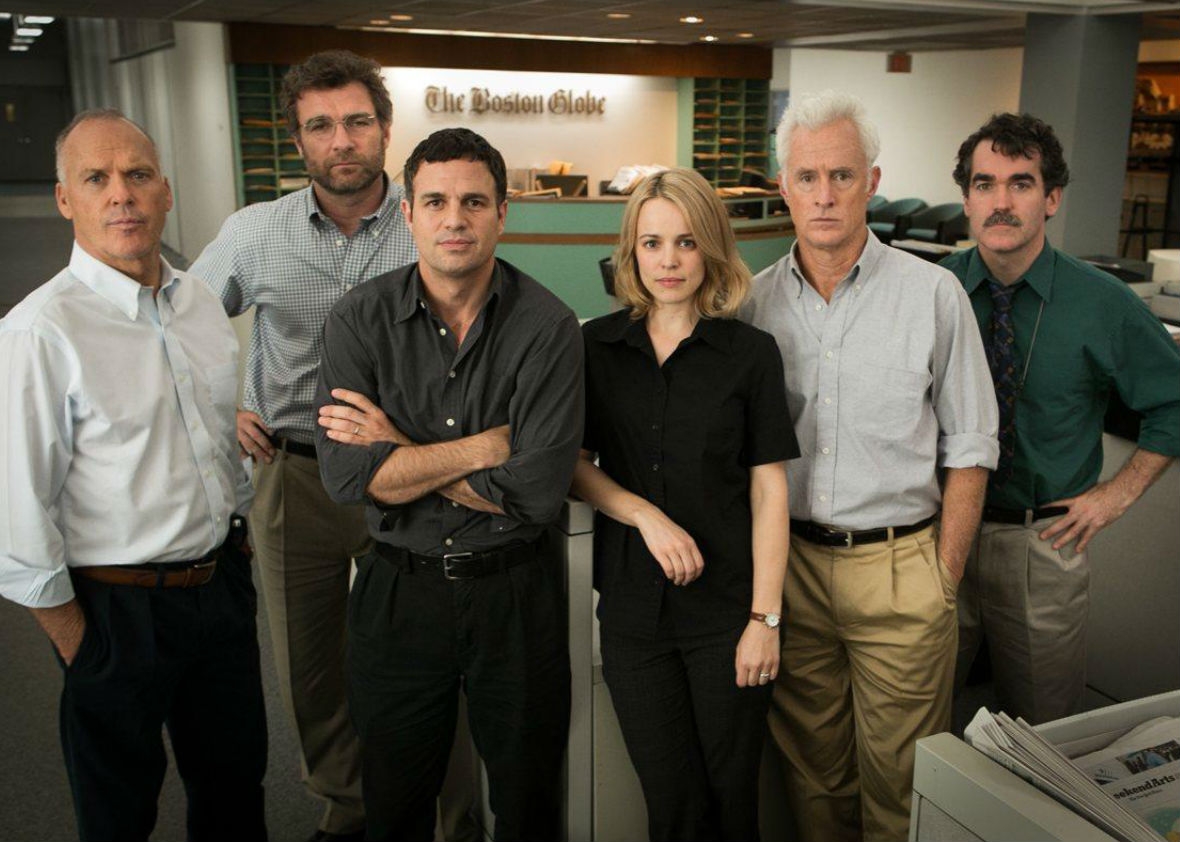 Here is one of the absolute best films of the year. Spotlight is an honest movie about unlikely, humble, hardworking heroes – daily newspaper employees – doing their job and trying to change the world.

Every person passionately working in a public career hopes to have some lingering effect on the world. Committed actors wish to illuminate the human condition. Politicians start out wanting to make policy that helps people. Good priests and ministers hope to provide spiritual guidance that changes souls and transforms communities. Talented journalists write stories to expose the truth. Director Tom McCarthy stands with the really Robby Robinson and the man who portrays him, Michael Keaton.

Spotlight is like All the President’s Men – a brilliant movie about smart people writing to right wrongs. In this case, the truth is a particularly ugly one: the Boston Catholic diocese’s systematic cover-up of priests abusing and molesting children.

“Spotlight” is The Boston Globe’s investigative branch; it’s the oldest continuous department of its kind in our nation. It carefully takes months and years to write airtight stories.

In the early 2000s, editor Robby Robinson (Keaton) and his crack team began digging into allegation of organized cover-up by the local Roman Catholic Church. The writers started a years-long inquiry; they found that priests were often shuttled around from parish to school despite repeated records of abusing, molesting, and raping children.

We already know this by now. However, the way Spotlight reveals this – the journey – is eye opening and riveting.

The movie, co-written and directed by Tom McCarthy (The Visitor, Win-Win), has this year’s best performance by an ensemble cast. Their work together is humble, delicate, and uniformed. Keaton, Ruffalo, McAdams, Schreiber and the rest underplay their parts; we get to know their character through their work and how they interact. We realize we are dealing with highly intelligent humans, even as we discover their flaws.

What that means is that Spotlight isn’t about hubris. It’s just about people trying to do their best. We experience the tedious, the critical, the political, and many other aspects that go into great news writing. We are frustrated as editors discuss timing and local politics. We fear children are at risk every day as the Globe’s work drags on and journalists dig deeper, interview more sources. The film makes us wonder who’s going to carry on journalistic investigation as newspapers die and the Internet takes over.

The film shows this framed by scenes with Boston’s many Catholic churches and schools dotting the city, their steeples towering above playgrounds and neighborhoods. Children laugh and play in the shadow of the cross.

Spotlight also provides a viewpoint on the dying dailies. One wonders how this sort of investigative reporting happens nowadays as subscriptions falter and newspapers shutter. The flick’s journalists talk about using the Internet to help them; they have no idea what that particular beast is going to do to their own careers.

McCarthy  and cowriter Josh Singer (The Fifth Estate) expertly mold very large, difficult and unwieldy subjects into a satisfying, informative film. By the end, we know more about this type of journalism, the judicial system, the Church, and the city of Boston. More importantly, this insight comes to us through the simple lives  of dedicated personalities, people we feel we’ve grown to understand as Spotlight fades and this type of investigative journalism – along with its supporting newspaper business – shrivels up and blows away.

Perhaps an Oscar win would open these questions up for more public discussion.