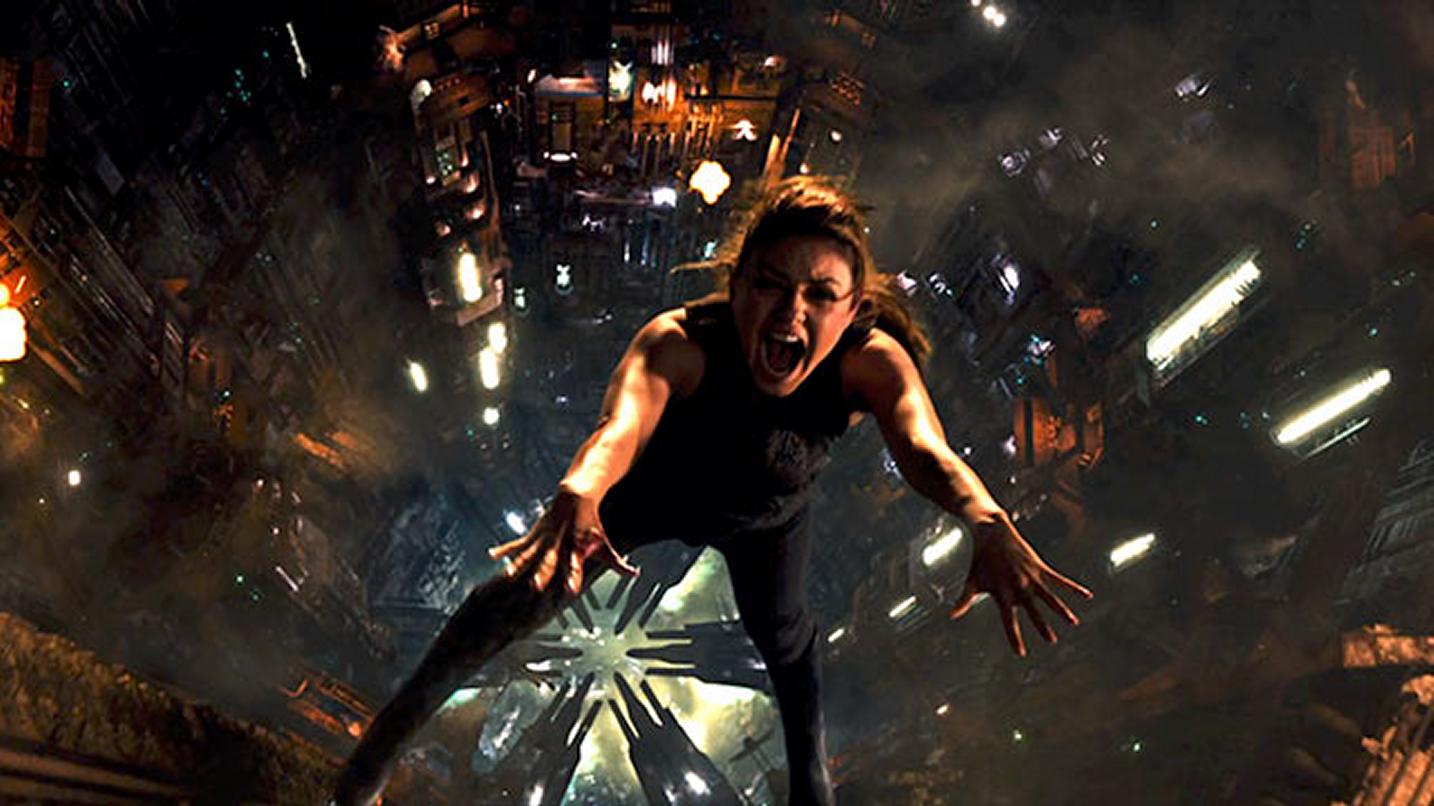 What a very, very expensive piece of cheese! If you think about this movie afterwards – and I suggest you don’t – the galaxy-sized plot holes and unanswered questions will make you giggle! However, you get to see every penny of the $175 million budget. It wasn’t spent on a particularly original script. Or, obviously, an acting coach. In fact, if Oscar voters see this before casting this year’s ballot, Eddie Redmayne’s acting will guarantee Michael Keaton the win.

Not that Jupiter Ascending doesn’t have it’s own trashy D-list charm. It’s visually stunning – an all-out attack on the optic nerves. Every so often, it actually recognizes what unapologetic garbage it is and adds a Fifth Element level of humor. Thank God Channing Tatum is gratuitously shirtless for parts of the film. Eddie Redmayne may have just lost his Oscar this year.

Unbeknownst to Earth, our entire history has been orchestrated, and humans have been farmed for centuries. Soylent Green might be people, but so is this elixir that keeps alien humans young and beautiful forever. Kunis is a Russian immigrant who – unbeknownst to her – is actually the reincarnation of the queen of the universe. If she reclaims her title, she can save the earth from being harvested. Tatum is a half-wolf bounty hunter who – unbeknownst to him – has been hired to find the queen. He has pointy ears and a German shepherd’s grimace.

Are the puppy-man and his queen going to fall in love? Does his breath smell like old garbage? Has he sniffed her butt yet?

It certainly is fun how several other science fiction movies and mythologies make brief appearance here. Crop circles are explained, as well as alien abductions. Dune, Flash Gordon, Star Wars, Stargate, and Terminator all get their nods. Some aliens look like demons, so we wait for ones who will look like angels – and we get them.

It’s not that the Wachowskis – who wrote and directed this – have ever been brilliant at scriptwriting. The Matrix, their first film, was stylistically groundbreaking. (That’s why Warner Bros. has given them carte blanche up to this point. Here’s hoping it ends.) The other two Matrix tales showed their limitations as writer. Speed Racer suffered from the same heaviness of tone in Jupiter Ascending. And this film is often as confusing as Cloud Atlas. Lana and Andy Wachowski, siblings, need to work with better scriptwriters (not themselves) and stronger producers who are able to control their worst qualities.

The Wachowskis call Jupiter Ascending a “space opera,” so perhaps they were shooting for all this over-the-top corniness taken deadly serious. Royal children plot against and kill each other in graphic manners reminiscent of Italian history. Hints of incent are tossed about. A certain melodrama permeates each visually overwhelming corner of this flick.

Yet, even with all the graphics and explosions, the biggest element missing here is good old-fashioned Guardians of the Galaxy fun.

Jupiter Ascending also certainly would’ve been improved by better acting. Kunis is sort of dead against all the green-screen effects. She too quickly adjusts to the news of multiple alien races, reincarnation, and factories hidden in the eye of Jupiter. Tatum seems to be unable to act beyond his canine scowl. The inadvertently hilarious Redmayne mostly whispers like his expensive costume is slowly choking him. Then, every so often, he shouts! It’s hysterically bad.

Yet, I bet a couple groups of people will line up to shell out cash for this trash. The first group want to be visually assaulted, and the Wachowskis definitely achieve that in a way that should be applauded. The other group will line up to watch this shipwreck in all its pricy, over-bloated glory!

Screened Out – The Theory of Everything